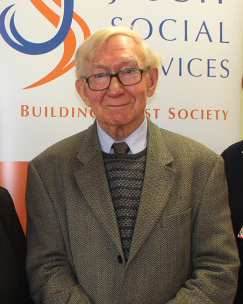 Professor Vinson was a dear friend of Jesuit Social Services and we are grateful for his generous contribution to our work over so many years.

Professor Vinson was an Emeritus Professor at the University of New South Wales and an Honorary Professor in the Faculty of Education and Social Work at the University of Sydney. He was also one of Australia’s leading social researchers and a passionate and steadfast advocate for public policy being utilized to enable people to overcome entrenched and structural disadvantage.

Between 1999 and 2015, Professor Vinson authored a series of reports on the geographical distribution of social disadvantage. In 2007 Dropping off the Edge, published by Jesuit Social Services and Catholic Social Services Australia, received over 284 scholarly citations and supported the establishment of the Australian Social Inclusion Board.

Eight years later, Professor Vinson and Associate Professor Margot Rowsthorne authored Dropping off the Edge 2015, which demonstrated once again that a small number of communities across Australia were dealing with entrenched social disadvantage.

Professor Vinson served as the foundation director of the NSW Bureau of Crime Statistics and Research after the landmark Nagle Royal Commission into NSW Prisons in 1978, which investigated the violence and brutality within the state’s prison system. During this time, Professor Vinson oversaw extensive reform to the system.

Professor Vinson was a former Head of NSW’s Department of Corrective Services, the foundation professor of behavioural science in medicine in the Newcastle Medical School and Professor of Social Work and Dean of the Faculty of Professional Studies at the University of New South Wales.

He also made a significant contribution to public education, including his role as Chair of the Independent Inquiry into NSW Public Education in 2001-2002. This Inquiry resulted in the implementation of a number of recommendations to promote a more effective and robust public education system in New South Wales.

Professor Vinson was gracious, courteous and generous with his skills and time. His work will have a lasting impact on public policy focused on improving outcomes for Australians for decades to come.

Jesuit Social Services is grateful for the warm, collaborative and deep friendship of Professor Vinson, and everybody at the organisation extends their condolences to his family, friends and colleagues.