Jesuit Social Services - The Man Box: A study on being a young man in Australia

The Man Box: A study on being a young man in Australia

The Men’s Project has released the first comprehensive study focused on the attitudes to manhood and the behaviours of young Australian men aged 18 to 30. The Man Box: A study on being a young man in Australia sheds a new light on the social pressures that young Australian men experience to be a ‘real man’ and the impact this can have on their wellbeing, behaviours and the safety of our wider community. This study is modelled on research in the United States, United Kingdom and Mexico that was released by Promundo in 2017. 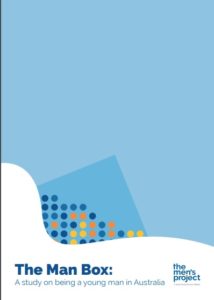 It involved an online survey of a representative sample of 1,000 young men from across the country, as well as focus group discussions with two groups of young men. The study utilises an internationally developed and applied analytical tool, known as the Man Box, to unpack the set of beliefs within and across society that place pressure on men to act in a certain way.

Participants in the online survey were asked their views on different topics about how a man should behave which were categorised under seven pillars of the Man Box:

We found that social pressures around what it means to be a ‘real man’ are well and alive in Australia.

Interestingly, despite these messages being conveyed to young men, the research also found that the uptake of the Man Box rules is not consistent across all young men, with some believing in and adhering to the ‘rules’ more than others.

Consistent with Man Box studies that have been undertaken in the United Kingdom, Mexico and the United States, the Australian research found that men inside the Man Box perform particularly poorly in relation to:

For example, 54 per cent of young Australian men felt they were under pressure to solve their own personal problems without asking for help.

In addition, among those inside the Man Box 44 per cent felt that they had a right to know where their girlfriend or wife was at all times, compared to a smaller, but still concerning minority of 37 per cent of those outside the box.

The pressures relating to being a man are everywhere in society and are reinforced and influenced by young men’s closest relationships – families, partners and friends.

Across all levels of society there must be a focus on building awareness of the Man Box norms and their harmful impacts. Positive alternatives should be promoted.

Everyone can take action by talking about the pressures of the Man Box with the boys and men in their lives, and by modelling positive alternatives to the Man Box norms in front of boys and young men.

We recommend action across a range of levels, from government to business, to community and academia to develop and test new approaches to these issues with young men. We also recommend further research to understand these issues in more detail.

Explore the Man Box in more detail and download the full report here.