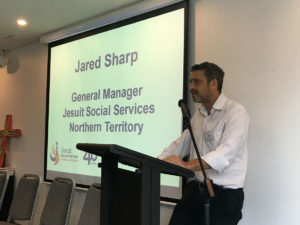 Youth justice has been in the spotlight across the country, and particularly in the Northern Territory since revelations of the abuse and neglect of young people in Darwin’s Don Dale detention facility led to the establishment of a Royal Commission into the Protection and Detention of Children.

Prior to the Royal Commission handing down its final report and recommendations in November 2017, Jesuit Social Services hosted a breakfast forum in Darwin about the importance and effectiveness of restorative justice practices – an approach that focuses on the rehabilitation of offenders through reconciliation with victims and the wider community.

We have delivered youth justice group conferencing in Darwin and Palmerston since early 2017. This model supports young people who have committed offences to take responsibility for their actions, come face to face with those impacted by their actions – including victims, family and police – and make amends. The program is proven to reduce re-offending among young people.

The breakfast forum was an opportunity to reflect on this approach, and the specific cultural needs of Aboriginal and Torres Strait Islander young people. A panel discussion featured Lynette Hansen (a victim of crime who participated in a conference in Palmerston), Simone Clagnan (Victims Support Agency in Victoria), Kim Mulholland (cultural mentor) and Delsey Tamiano (Danila Dilba Health Service).

It was pleasing to note that the final report of the Royal Commission included a number of recommendations about expanding and enhancing diversion options for young people in the Territory.

We look forward to a greater use of restorative justice approaches across the country, to steer young people towards positive pathways and create safer communities.