This submission responds to the 2015 Senate Inquiry into the indefinite detention of people with cognitive and psychiatric impairment in Australia.

The submission focuses on people with cognitive impairment, however, many of its recommendations are also relevant to people with psychiatric impairment within the criminal justice system.

The submission identifies that Aboriginal and Torres Straight Islanders, people with a dual diagnosis (of intellectual disability and mental health problems), women and young adults are particularly vulnerable cohorts.

Based on our extensive experience working in Victoria and the Northern Territory (particularly Central Australia), along with the evidence of what works, we recommend: 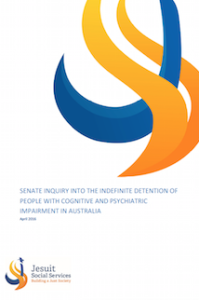