The single largest barrier to employment for migrants and refugees in Australia is the lack of opportunity and quality work experience. The African-Australian Inclusion Program (AAIP) breaks down this barrier by providing six months of paid work, mentoring and career coaching to qualified African-Australians.

Run in partnership between Jesuit Social Services and National Australia Bank (NAB), AAIP has successfully placed over 300 participants since its inception in 2009. NAB’s AAIP team coordinator BRENDAN MA spoke with AAIP participant Sinke Wesho about her courageous journey to a promising corporate career. 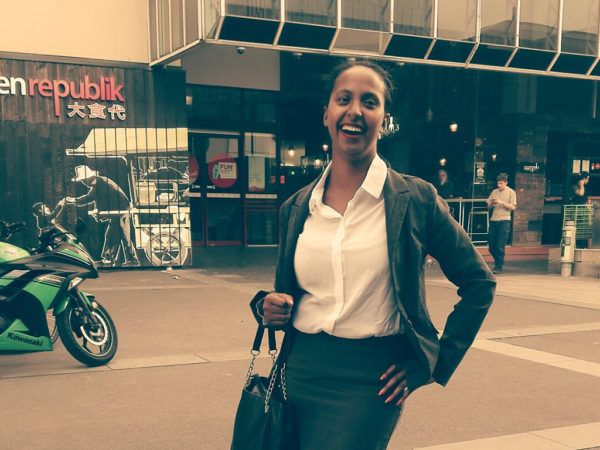 Sinke is a Business Analyst at NAB and former African-Australian Inclusion Program participant.

My name is Sinke Wesho and I was born in Oromia, grew up in Kenya and have been in Australia since 2007. I joined NAB as a Business Analyst in the Corporate Super sector of the business.

This may sound clichéd, but I do pinch myself to make sure that I am not dreaming. I attended the AAIP information session in 2016, but did not apply for any position as I was afraid of further disappointment in seeking employment opportunities. I have had a long track record of disappointment when applying for employment in this country.

After completing my degree in International Relations in 2013, I believed I was armed with the necessary weapons to go out and hunt for the best jobs in the industry. Before completing my studies, I volunteered with various organisations to gain practical skills. I travelled to countries around the world and gained quite good exposure. But when I attempted to secure employment, the reality was different.

For over a year, I was beautifying my CV and seeking opportunities. Nothing seemed to surface. After a while, I moved from applying for professional roles to anything that paid the bills. Eventually I began to leave my qualifications out of my resume; they did not seem relevant any more. I applied for roles like case manager, youth worker and kitchen hand.

“Eventually I began to leave my qualifications out of my resume; they did not seem relevant anymore.”

I took short courses like barista, but still had no luck. I sat through one interview where I was asked if I had six months’ experience. I did not, but showed my willingness to learn. I never got a call back. After nine more months, I was left wondering what this country promised me. The promise of fairness and a ‘fair go’ didn’t seem to apply to me.

This year, two friends at NAB, who also joined through AAIP, encouraged me to apply. I went from having given up on applying for jobs to editing my resume (almost daily) and having people proofread it. I wanted to give it a go one more time. Finally I was successful. This journey is not just about the job for me, it was about building the courage to dream and set a goal in life, again.

Since beginning at NAB a few weeks ago, the promise for fairness and equal opportunity finally came to fruition. Paul Anthony, my PL [People Leader], not only believed in my capabilities, but granted me the opportunity to put them to work. The designers off AAIP honoured the spirit of giving everyone a fair go in Australia.

This role is not solely about me, it’s about my brother who sacrificed so much to educate me. There are so many individuals, particularly young adults like me, who would like to embrace Australia as a multicultural land of opportunity. Sadly, chances are very limited and it frustrates many talented people. NAB just concluded a journey for me, which so many in my family and community also embark on. It goes without saying that other corporations should follow suit.

NAB just concluded a journey for me, which so many in my family and community also embark on. It goes without saying that other corporations should follow suit.

I welcome the Victorian government’s gesture to support this initiative; however more needs to be done both by large corporations and government bodies. They should embrace the idea of pooling talent from different cultures, professions and mindsets to realise much bigger benefits. NAB has been bold enough to take up the challenge and it has proven that people are capable, can adapt, and can actually deliver despite the length and sound of their names, the colour of their skin or their past.