Jesuit Social Services - With suicide on the rise, postvention services can save lives

With suicide on the rise, postvention services can save lives

In September, the Australian Bureau of Statistics released its annual Causes of Death report which provides analysis on Australia’s leading causes of death. 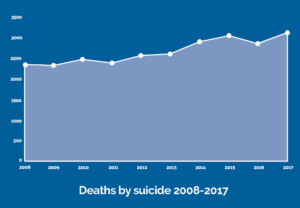 In 2017 a total of 3,128 people across Australia died from suicide. Deaths from suicide occur among males at a rate more than three times greater than that for females, and account for a greater proportion of all Aboriginal and Torres Strait Islander deaths (5.5%) compared with deaths of Non-Indigenous Australians (2.0%). These are sobering figures.

Suicide Prevention Australia and SANE Australia recently released a joint position statement on Mental Health and Suicide Prevention. It highlights the importance of increased investment and access to effective mental health services based on population and local community need, especially in rural and regional areas of Australia due to lower levels of access to services.

Recognising international research which shows that those bereaved by suicide are more likely to take their own lives, we have delivered Support After Suicide across Melbourne and regional Victoria since 2004, providing specialist services including counselling to people bereaved by suicide. In 2016–17 the program assisted 555 children, young people and adults bereaved by suicide.

The Federal Government recently announced funding of more than $36 million in national suicide prevention projects to raise awareness of the impact of suicide to support Australians who may be at risk.

We also welcomed the recent Victorian Government announcement to expand funding for the HOPE initiative, which provides support and follow up for people leaving hospital after a suicide attempt, as part of the Victorian Suicide Prevention Framework 2016–2025.

However, there remains a lack of certainty from both federal and state governments regarding ongoing, sustainable funding for Support After Suicide.

Support After Suicide Manager Louise Flynn says “We have seen some positive investments into mental health support at state and federal levels including Victoria’s 10 year mental health plan, although we are yet to see dedicated funding for people bereaved by suicide. These figures outline what a major challenge we face as a society to tackle our mental health crisis.”

We continue to call for sustainable funding for Support After Suicide, and will continue to advocate for holistic approaches that will help reduce the harm of suicide and strengthen people’s resilience and wellbeing.