Jesuit Social Services’ The Men’s Project recently released The Man Box: A study on being a young man in Australia. 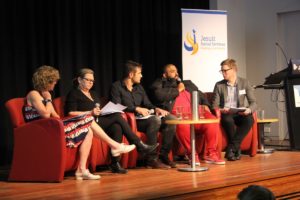 The Man Box research was launched at events in Sydney, Melbourne and Darwin.

The report is the first comprehensive study focused on examining the attitudes to manhood and the behaviours of young Australian men aged 18 to 30, modelled on research in the United States, United Kingdom and Mexico that was released by Promundo in 2017.

It involved an online survey of 1,000 young men from across Australia, as well as focus group discussions to uncover the set of beliefs across society that place pressure on men to act in a certain way.

Executive Director of The Men’s Project Michael Livingstone says that the findings reveal that young Australian men are told “to be tough, to be strong, to respond to threats with violence and not back down. These messages are strong in Australia and young men tell us that they hear these messages from the time that they are born.” This rigid set of beliefs make up the Man Box rules.

Michael says that despite these pressures, uptake of the Man Box rules is not consistent across all young men, with some believing in and adhering to these set of beliefs and attitudes more than others.

“What we find is that those young men who most strongly agree with the Man Box rules perform poorly on a range of behaviours that are both harmful to themselves and to others. They report higher levels of perpetrating physical, online and verbal bullying, perpetrating sexual harassment against women they don’t know, being involved in car accidents, drinking to excess, and poorer levels of mental health.”