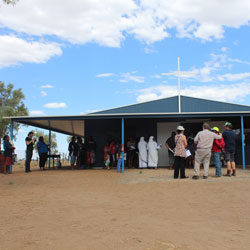 Jesuit Social Services was proud to recently organise the opening and blessing of the Atitjere Church in the Sandover region of the Northern Territory.

Our involvement in the project stems back to 2012, when our Central Australian team was invited to visit the Atitjere community, 215 kilometres from Alice Springs at the foot of Mount Palmer.

Atitjere is an important ceremonial area for the Eastern Arrernte nation and has close family and cultural connections with Santa Teresa, where Jesuit Social Services has long-standing relationships.

At the time, the community was deciding how to best utilise Lease money, which is administered by the Central Land Council. We were invited to be a part of the conversation, the outcome of which was that the community wanted to use the money to build a church. Senior Eastern Arrernte man Raymond Webb said the church would ‘give us the opportunity to sit together and talk about how to treat each other.’

As well as a place for the local community to congregate, the church would also provide training and employment opportunities to local people. The building was constructed over a six week period by local Aboriginal-owned social enterprise Tangentyere Constructions according to plans drawn up in consultation with the community, and training six local men in construction work in the process. 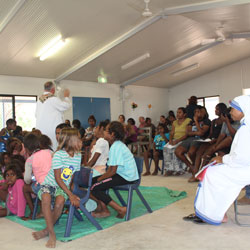 Last month, Jesuit Social Services CEO Julie Edwards, Board of Directors member Shane Healy and John Adams and Jorge Basave from our Central Australian office drove to Atitjere with Father Jan from the Alice Springs Parish and Dave Howard from Central Land Council to formally open and bless the church. The opening event and celebratory barbecue, which we hosted, were attended by the whole community.

The Atitjere church project was a great example of community self-determination with the community conceiving and driving the project through to completion. The sense of pride and community ownership of the building is clearly tangible and Jesuit Social Services was pleased to provide a co-facilitating role.