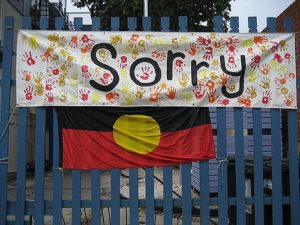 A decade on from Prime Minister Rudd’s landmark Apology to Australia’s Indigenous Peoples, ANDY HAMILTON SJ reflects that the great hope engendered by it remains unrealised.

Ten years have passed since the Apology to Australia’s Indigenous Peoples by then Prime Minister Kevin Rudd on behalf of Parliament and the nation.

It seems longer. That was a time of great hope.

Today, with respect to Indigenous affairs as to much else, fewer people hold great hope that anything good can come out of Government.

The evidence of the harmful effects of the Intervention, of the continuing disproportionate and brutal incarceration of young Indigenous people at Don Dale, the lack of progress on the indices of Indigenous disadvantage, the brusque dismissal by the Government of the proposals by the Constitutional recognition Summit of an Indigenous advisory body and the defensive refusal to discuss any alteration to Australia Day suggest that we are back to unapologetic business as usual in Australia.

Yet the Apology remains important as a marker of what is decent and what may be possible. It was whole hearted and warm hearted in its rhetoric, it was made face to face to representatives of the Indigenous community, including many who had been taken away from their parents as children. It was made solemnly in Parliament on behalf of all Australians. The setting and the solemnity of the occasion implied a commitment to Indigenous Australians that they would be listened to and consulted, not decided for, when their welfare was at stake.

The Apology engendered great hope. It remains unrealised. Indigenous Australians are still treated as the objects of policy and not as subjects who help shape it. Their voice is still shouted down.

But there are signs that public acceptance of this unacceptable business as usual is running thin. When thinking of the celebration of Australia Day, an issue perhaps more important for the self-respect of non-Indigenous Australians than it is a high priority for the First People, an increasing number of people recognise how problematic is the date. This was evident this year in the marches on Australia Day.  As was the case with the symbolism of same sex marriage, which was seen as the necessary ending of discrimination, and so brutality, against a significant group of Australians, so people now increasingly regard as inappropriate the celebration as Australia’s national day of an event that marked the beginning of the dispossession and discrimination against the first Australians and their descendants

Despite strident opposition, that sentiment will surely grow. With time, negotiation and courageous leadership Australia will find a date to remember and celebrate the different strands of our history that unite us.  Similarly, more people are open to a consultative body for decisions touching Indigenous Australians, seeing them as a unique group in Australian society.  Prejudice and contempt remain, but sprigs of green keep pushing through the concrete.

For Jesuit Social Services, as for the Catholic tradition that it inherits, symbolism matters. We work with many Indigenous young people and know that when we accompany them we commit ourselves to honour their history and their struggle to find acceptance of their rightful status in Australia. The Apology remains a powerful symbol of that commitment and encourages us to deepen it.