From humble beginnings with eight young adults in Four Flats in 1977 to those many thousands who have been involved since then as staff, board members, participants, volunteers, friends and companions, we have good reason to pause and give thanks for many things, particularly those gifts of mercy offered, shared and received.

Brian also spoke to the mercy that underpins Jesuit Social Services’ work and reminded attendees that each of us is ‘more than the worst thing we’ve ever done’. Brian’s Homily is available in full on the Australian Jesuits website.

At the beginning of the Mass, symbols that represent Jesuit Social Services’ values were presented and placed in front of the altar. These included tea cups to represent relationship and hospitality (welcoming), a candle to represent our reflective nature (discerning), and an image of fire to represent the fire in the belly that compels us to go where the need is greatest (courageous). We also used soil from our office in Brunswick, a neighbourhood we’ve worked from since the 1980s, to represent our origins. Participants were invited to reflect on the values and the spirit which have marked their contribution to the work of Jesuit Social Services.

The Mass was followed by a convivial morning tea at our Richmond office, where Aunty Pam Pedersen welcomed us to Country and Patricia Faulkner, Board Chair, spoke about Jesuit Social Services’ milestone year. We thank everyone who shared in this happy celebration. 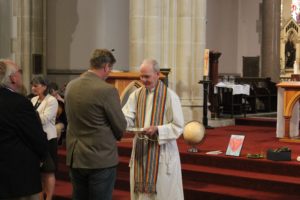