Jesuit Social Services - On a pathway to an improved future

On a pathway to an improved future

Navigating day to day life after leaving prison can be extremely challenging for anyone – let alone somebody with an acquired brain injury (ABI).
For Amber (not her real name), this was the case.

“We met Amber after she had left prison and it was clear that her acquired brain injury impacted her in many ways, including severely affecting her short-term memory,” says Brigid Henley, Coordinator – Justice Special Projects at Jesuit Social Services. 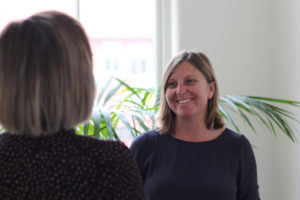 “Amber was a victim of family violence, had not finished school which limited her employment prospects and had found the process of dealing with police, lawyers and judges extremely overwhelming.”

Sadly, Amber’s story is not uncommon. Although just two per cent of the general population has an ABI, in the Victorian prison system, the figure is 33 per cent for women and 42 per cent for men.

Some people, like Amber, sustain their ABI as a result of family violence while others are linked to substance abuse problems or head trauma such as road accidents.

Amber says her ABI impacts her on a daily basis.

“I feel like a different person – I don’t feel as alert and on the ball,” she says.

“There are daily things that are difficult [for me], which didn’t used to be difficult.”

Amber participated in the Enabling Justice Project, run by Jesuit Social Services and RMIT’s Centre for Innovative Justice, which aims to address the overrepresentation of people with ABI in the justice system.

Jesuit Social Services’ work for 40 years has revolved around forming deep and respectful relationships, to help people realise their potential. Amber’s relationship with Brigid helped her feel validated for the first time in years and ensured she is on a positive pathway.

“We have helped her obtain a Working With Children’s Check and look for volunteer work in a local op shop,” says Brigid.

“We also supported Amber to complete a barista course through our Jesuit Community College, which gives her a qualification and can help open doors to work in the hospitality industry.”

“Amber’s outlook on life has significantly improved since we began working with her – for the first time in years she can see a future where she is a contributing member of society.”