A new report by Jesuit Social Services reveals the physical and mental impact that isolation can have on young adults in the Victorian prison system. Change is needed to improve their chances of rehabilitation and reintegration in the community, writes Jesuit Social Services Communications volunteer LIAM FALLON.

Like many others, James was transferred from a youth justice centre to an adult prison when he was 16. At 19, he was released from prison, where he had been incarcerated in isolation – 22 hours in cell, two hours out of cell. 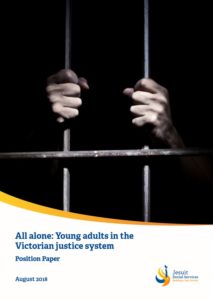 Despite James’ ability to secure transitional housing following his release, his struggles on the outside and in his community became apparent. To overcome them, James tried to turn his bathroom into a cell. He slept in the bath and prepared food in the bathroom. He fitted the bathroom with a radio, kettle and toaster in order to resemble the confines of his time in isolation.

Unfortunately, James returned to custody soon after his release.

James’ story is one of many that are featured in Jesuit Social Services’ new report, All alone: Young adults in the Victorian justice system, which highlights concerns surrounding the use of isolation on young adults in prison. Isolation is an extreme punishment that bears great harm upon young people. As young adults’ brains are still developing into their late 20’s, studies have shown isolation to have a severely negative impact on their cognitive abilities and mental health, not to mention the detrimental physical effects of being kept in a confined space for long periods.

Isolation can lead to disorientation, anxiety and depression, hallucinations, psychosis, self-harm and suicide. It can result in gastro-intestinal problems, migraine, weight loss and deterioration of eyesight, as well as aggravation of prior medical conditions.

Research shows that the majority of young people in prison are disadvantaged by poverty and have already been exposed to trauma and neglect, psychiatric illness, substance abuse and cognitive and developmental impairment.

Placing these people in isolation is not an effective or, importantly, humane method of incarceration and rehabilitation.

While in isolation, prisoners’ access to programs and relationships that may help their rehabilitation is limited or non-existent. This, combined with the deterioration of their mental health, means that young adults are more likely to struggle upon release into the community.

Many re-offend as a result.

Young people are the most likely group to re-offend upon release from prison. The recidivism rate for those under 24 in Victoria is 52.7 per cent, eight per cent higher than for the overall adult population of people leaving prison.

Although the rate of offending is highest among young adults, their crimes are frequently non-violent and of a comparatively less serious nature. By placing young adults in isolation, we are enlarging the potential for them to return to prison for crimes that are characterised by impulse and immaturity.

Another consequence of the recidivism caused by isolation is overcrowding of Victorian prisons. The state government has responded by building more prisons rather than investing in prevention, diversion and rehabilitation.

While Jesuit Social Services calls for an increase in staff to meet overcrowding in Victorian prisons, greater investment in prison staff that improves their ability to appropriately handle trauma, cognitive disability and mental health and de-escalation techniques would lessen the use of isolation and overcrowding.

Isolation should be used only as a last resort when all de-escalation strategies have failed and there is a risk of serious harm to the prisoner or others. It should never be used as a punishment, nor as a way of managing behaviour.

We recommend that the Victorian government require all prison operators to record data on the use of isolation and restraints in Victorian prisons and that this data be made public. In this way the current lack of transparency and accountability surrounding isolation may be improved, and young adults’ chances of rehabilitation and reintegration in the community may be maximised.