The experiences of more than 50 people directly impacted by the suicide of a loved one are explored in a new Australian play produced by Anvil Productions and supported by Jesuit Social Services and program Support After Suicide. 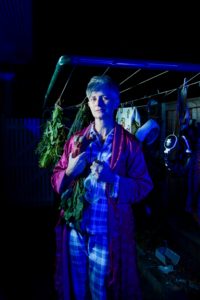 2:20AM, which premieres in Melbourne on August 29, is written by award-winning playwright Rebecca Lister who has previously collaborated on several creative projects with Support After Suicide participants.

“2:20AM is based on a series of interviews conducted with those bereaved by suicide, plus my own experiences as both a bereaved community member and the facilitator or numerous writing classes. It shines a light on the torment, bewilderment and inspiring resilience of those left behind after suicide,” says Rebecca.

Four ordinary people, all bereaved by suicide, meet as strangers at a creative writing class and are forced into a reluctant bond. Together they grieve, laugh, behave badly, and reveal far more about themselves than they bargained for.

Support After Suicide, run by Jesuit Social Services, was established in 2004 to provide bereavement support to people left behind after suicide.

Staff members of Support After Suicide will hold an audience forum to answer questions after each of the 10 performances.