Navigating a future to stay in school and out of trouble 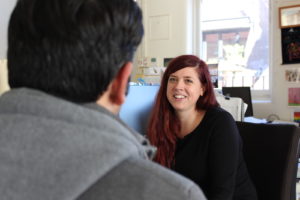 Struggling with anxiety and other mental health problems, sixteen year-old Alex found it increasingly difficult to stay in school and was at risk of dropping out altogether. That’s when our Navigator worker stepped in.

The Navigator program works intensively with young people, families and schools to help young people overcome barriers that stop them from making a successful return to school. The risk of not intervening is significant – about two-thirds of children and young people in prison in Victoria have been previously suspended or expelled from school.

With the support of Pete, his Navigator program worker, Alex is turning his life around and is now attending school regularly. Alex’s story is not uncommon.

Fifteen year-old Adam started missing school when he was in grade five. Struggling with a learning difficulty and anxiety, Adam fell behind in class and dropped out in year eight.

Adam doesn’t use the word ‘anxiety’, but has described to Beth, his Navigator worker, that his heart starts to beat quickly when anyone discusses school with him and when his mum comes to wake him up in the morning to get ready for school.

In conversation with Adam’s mother, Julie, Beth quickly realised that the secondary school was unaware of Adam’s previously diagnosed learning problems, despite Julie’s attempts to raise her concerns.

Because there had been a number of different service providers over the years, it seemed no one held the complete story about Adam, and understandably it took a while for Beth and Adam to build a trusting relationship. Gradually, Adam got to the point where he felt comfortable opening up. Once all the relevant information had been gathered and the appropriate tests had been completed, a tailored plan was put into action.

It was decided that a mainstream school setting would not work for Adam so he enrolled into a flexible learning program which was better suited and more responsive to Adam’s specific needs.

Although Adam isn’t completing his full timetable just yet, he is attending school regularly. He also attended an interview for a casual job. These achievements, his mum says, are huge successes and significant signs of Adam’s building confidence.

Intervening early is critical to ensure young people like Alex and Adam stay in school and out of trouble. We welcome the Victorian government’s recent funding announcement about the continuation and extension of Navigator’s vital work.

Names have been changed to protect identity.