Jesuit Social Services - Migrant and Refugee Sunday invites us to extend our compassion beyond our own suburb, city and nation

Migrant and Refugee Sunday invites us to extend our compassion beyond our own suburb, city and nation

World Migrant and Refugee Sunday (August 26) invites us to extend our compassion beyond our own suburb, city and nation, and reminds us that the plight of refugees and immigrants is worldwide, writes ANDY HAMILTON SJ. 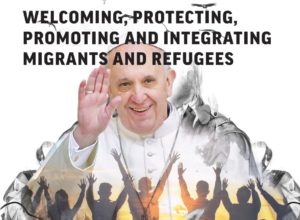 World Migrant and Refugee Sunday is celebrated by Catholics around the world.  It invites us to extend our compassion beyond our own suburb, city and nation, and reminds us that the plight of refugees and immigrants is world-wide. The constant flow of people from the Middle East, the pushing back of refugees from Europe, the hostility shown by governments and people in many countries, the suspicion of migrants from Africa and the punishment of people already punished by war, are features of many societies besides our own.

Compassion and hospitality are central values of the Catholic Church. They are Jesus’ values. He invites us to feed people who seek protection and are left without any support wherever we are.  He also invites us to help their children learn, to offer them free medical care, to find them work that will help them support themselves, to demand compassion from politicians, and to weep at and denounce cruelty towards them.  These invitations are not made simply to saints in other places and at other times. They are made to people like us around the world.

Pope Francis is often seen as the face of the Catholic Church. His own face has certainly been turned compassionately to people who have sought protection. Early on as Pope he visited Lampedusa, the Mediterranean island to which people seeking protection often came. He prayed with them and lamented the cruelty that led so many of their relatives and friends to die at sea.  Last month on the anniversary of his travel to Lampedusa he again prayed for them.

Each Migrant and Refugee Sunday he sends a message to Catholics and through them to the wider world. This year it is built around four words:  welcome, protect, promote and integrate. Each is a central part of a good society. At the heart of each is the conviction that each human being is precious and is bound to all other human beings. We make a claim on each other. These words also make a claim on all our Jesuit works, including Jesuit Social Services. Refugees are our brothers and sisters, and in their vulnerability and resilience they are blood brothers of the people whom we serve.

To welcome is to smile, speak well of people, and to make them feel at home. To protect is to look beyond numbers and differences, to recognise the danger that people are in, and to respond by giving them shelter. To promote is to look to their welfare, to help them access services, to speak up for them and to make connections between them and society at large.  Finally, to integrate is to invite them into our churches and local groups, to visit them in their places of worship and at their festivals. It is to make space for them by accepting their invitation to move into their space.

We can do this by prayer, by conversation, by visiting, by advocacy and by hospitality. All these things are the stuff of the Gospel.