Since 2008, staff like JORGE BASAVE in our Northern Territory Program have worked alongside Aboriginal communities to build their capacity for self-determination. JORGE tells SEZ WILKS about the realities of working in remote Australia – and how much he loves driving in the desert. 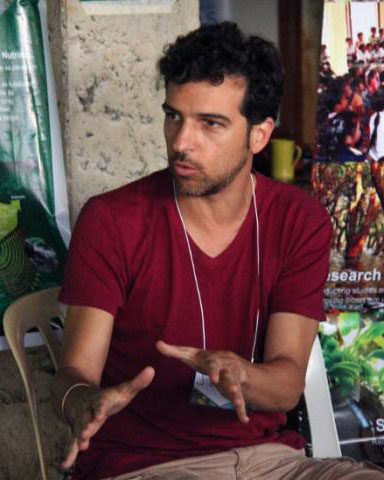 “I’m inspired by people who choose to put themselves in different situations out of their comfort zone. People who choose to keep learning. There is an Australian, Jessica Watson, who was the youngest woman who went around in the world in a boat. I wouldn’t be able to do that myself, so reading about her journey around the globe in that little boat is inspiring.

“I wasn’t one of those people who had a clear idea of what I wanted to be when I grew up. I was always open to change and for new things to do. That’s how I first left Mexico City to work in the Mexican Caribbean with a tiny community in a tiny environmental group. And then eventually I moved to Australia on an opportunity to study. I guess I just had a good idea of how I wanted to live, not what I wanted to do.

“I came to live in central Australia because my wife got a job here. I was looking for meaningful work and I found a position at Jesuit Social Services. I hadn’t heard of them, but the fact that they were working in remote Aboriginal Australia, and that I’d studied in a Jesuit university, made me go and have a chat.

“Jesuit Social Services in central Australia was John [John Adams, former General Manager of our Northern Territory program]. I liked the way he approached things. He was very generous with his knowledge and a very fresh person to work with. That was my first impression – this person who had all this experience and was willing to share his knowledge. But when I had a chance to go to Melbourne and participate in an All Staff Day, I really got a sense of the diversity of the staff. Knowing it was a diverse workforce with people of all ages was really appealing to me.

“I love driving in the middle of the desert. I really love the sense of getting ready in your car, with everything you need, and then just driving for hours in the red sand to get to your workplace, which is this tiny community away from everything else that is familiar to you. I really like that. The feeling and memories of my first trips to Santa Teresa will always stay with me. It’s a unique way to commute!

“It’s been a steep learning curve working with and alongside Aboriginal people. Now I have a more realistic picture of how things work in remote Australia and the real challenges of working in this context. It’s been a professional journey, but also a personal journey. Some of it has been challenging and some of it has been inspiring, but I’m more realistic about what can be achieved.

“I’m hopeful that we can work toward a long-term vision and have consistency. And if that can remove some of the confusion, then we’re winning. Working in Aboriginal affairs is confusing for everyone involved: for the communities and for the people who work there. There’s a lot of work to be done from both ends. There’s a lot of work and understanding that needs to come from us – I mean a lot – and that’s hard to obtain. Both parties need to work really hard. It’s not just a one-way track.

“With Jesuit Social Services I have found a safe place to work and learn. My advice is: don’t be afraid of asking tough questions. Trust that the organisation will support you and understand where you are.”