At the school’s first assembly of the year, Aretha Stewart Brown, daughter of Jesuit Social Services staff member Paulie Stewart, delivered an acknowledgement of country and talked to students about the “importance of kindness”. 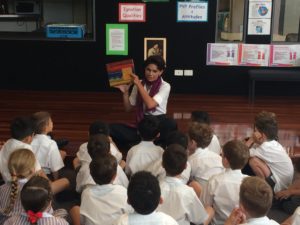 She also challenged everyone to “aim high and be the best you can be.” Later, Aretha visited the early years campus to talk about Indigenous culture and art.

“It is great to have Aretha on our team alongside new singer Atong Agoth who is from a South Sudanese background and the very talented Indigenous singer Aaron B this year’’ said Just Voices Speakers Program coordinator Danielle Sherry.

Danielle said speakers involved with the program have engaged with hundreds of thousands of people at more than 300 events throughout Australia and East Timor.

“Our presentations and the exciting projects we have worked on have all been vastly different, just like each of our presenters. But there are always constant themes of inclusion, hope and resilience when they share their personal stories,” she said.

Shortly, seven of the Just Voices speakers will be hosted at the Shrine of Remembrance to be formally recognised for their involvement with a major new exhibition sharing stories of those who were forced to flee conflicts and build a life elsewhere.

“One of the great things about Just Voices Speakers Program is that our speakers and musicians have been a part of so many great projects and experiences with the program. Through mentoring and support, we want to be the stepping stone for their careers’” said co-coordinator Paulie Stewart.

To learn more about the Just Voices Speakers Program or to book a presenter please visit the website or call (03) 9421 7600.