More than 100 guests joined us as we officially launched the #WorthASecondChance campaign at City of Melbourne Bowls Club last week. 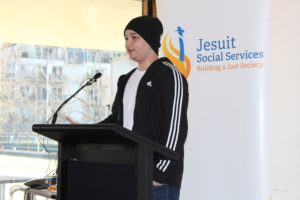 Rapper Caution addresses the crowd at the #WorthASecondChance campaign launch.

The campaign aims to build a groundswell of public support for a more effective youth justice system that holds young people to account, while also giving them the support they need to get their lives back on track.

Sammy, a young man who got his life back on track after involvement with the police, told the audience that young people need support to reach their potential.

“We’re trying to get kids on the right path instead of being so tough on them – let’s focus on a strength-based approach because everyone has a talent,” he said.

Emerging rapper Caution also spoke about how factors in his life, including the passing of his mother when he was 13, led to him falling in with the wrong crowd and getting into trouble.

Jesuit Social Services CEO Julie Edwards outlined how the campaign will engage with members of the community, and encouraged people to register to host a kitchen table conversation to stimulate grassroots discussion about positive approaches to supporting young people in need.

The launch event also featured two short films of Jesuit Social Services program participants, who shared their stories of turning their lives around.

Watch the videos and download campaign resources at: http://www.worthasecondchance.com.au/