After 40 years of working with men and boys who are in trouble and causing trouble, Jesuit Social Services is pleased to officially launch The Men’s Project today. 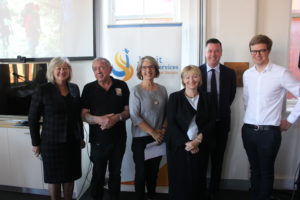 Around 70 guests gathered at our Central office in Richmond for the launch, which featured speeches from CEO Julie Edwards, Chair of the Board Patricia Faulkner, former Minister for Corrections the Hon. Wade Noonan and President of the Children’s Court of Victoria, Judge Amanda Chambers.

Staff member Ron Zarth, who spent time in Pentridge Prison as a young man, also spoke about his challenging upbringing, his contact with the justice system and his current work with at-risk boys and young men.

The Men’s Project was founded in Jesuit Social Services’ 40th year out of recognition that many of the boys and men we work with perpetrate violence, and that many are struggling with complex issues including substance abuse and mental illness.

The project aims to help boys and men to live respectful and fulfilling lives, and have healthy relationships, free of violence. It will feature the development of a range of programs and interventions, and include research into the issues facing boys and men which will be shared with the wider community.

At the launch, Jesuit Social Services’ Chair of the Board Patricia Faulkner announced that the organisation has received funding to pilot a restorative justice program for adolescents who use violence in the home, based on the Youth Justice Group Conferencing model which we have delivered in Victoria for 14 years and in Darwin since early 2017.

We look forward to continuing to share updates on The Men’s Project throughout 2018 and beyond.