Jesuit Social Services - "If we can change the attitudes, beliefs and behaviours of men when it comes to violence against women then men will flourish"

“If we can change the attitudes, beliefs and behaviours of men when it comes to violence against women then men will flourish”

On the International Day for the Elimination of Violence Against Women (November 25), ANDY HAMILTON SJ writes that improving the attitudes, beliefs and behaviours of men towards women will improve outcomes for all members of society. 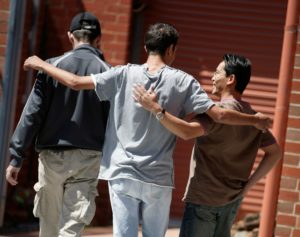 Some people have asked why there is a special day dedicated to the elimination of violence against women. Is not all violence equally reprehensible, whether directed against men or women?  The answer, of course, is that all violence is equally to be deplored and eliminated. But the fact is that one in three Australian women has experienced physical violence, and on average at least one woman per week is killed by a partner or former partner in Australia.

The costs of this violence are immense, including the destructive effect it has on the development of children who are often silent witnesses and victims.  Violence against women is a crime against the whole of society.

It is important that we keep before our eyes the pain, shame and physical harm caused by violence, and that we acknowledge it can never be justified by beliefs, custom or by extenuating circumstances.  The extent and seriousness of violence against women has long been masked by neglect, by blinding ourselves to bruises of body and spirit that are clear to see, and by assuming that each man’s home is his castle with its own justice system, violent or not, which must not be interfered with. The opinion that what happens in the family stays in the family is a charter for violence. At a time when the extent of domestic violence in Australia has become clearer, it is necessary to reject all the things that conceal and minimise it.

Although the day for the elimination of violence against women begins rightly by focusing on protecting victims, it should not be allowed to end there. Violence against women is overwhelmingly perpetrated by men.  It follows that we must turn our attention to the reasons why men harm women – physically, sexually, emotionally and financially – not to find an excuse for their behaviour, but to protect victims of violence by helping men understand and change their ways. If we can change the attitudes, beliefs and behaviours of men when it comes to gender equality and violence against women then men will flourish.

That is the significance of the Jesuit Social Services’ The Men’s Project. It asks what factors in men’s backgrounds and our wider society and culture leads them to acts of harm, against themselves and others.  Many men grow with stunted understanding of what it means to be male which is reinforced by accepted stereotypes of masculinity across society. Where masculinity is associated with aggression and stoicism in accepting pain, and no weight is placed on emotional honesty or on the exploration of feelings, frustration and resentment are too often expressed in violence. Patterns of behaviour learned as children are likely to be repeated as adults.

This suggests the size of the challenge of changing violent ways of acting towards woman. But for the sake both of all of us this challenge must be met.