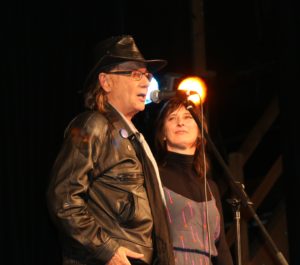 That was the verdict from all those involved with the recent trivia night to raise funds for Artful Dodgers Studios, held at the Collingwood Town Hall and featuring a rocking live band, performances by studio participants, a highly competitive 1980s music/film trivia competition and a  live auction.

This year’s sold out event featured such varied donated auction prizes as a cruise on Sydney Harbour, tickets to see The Wiggles, tickets to KC and the Sunshine Band and lots more.

The night raised significant funds for the ongoing work of Jesuit Social Services’ Artful Dodgers Studios. The studios, celebrating its 20th anniversary, is one of the organisation’s flagship programs and an integral part of  Jesuit Community College offerings. Artful Dodgers Studios uses art as the hook to engage ‘at risk’ young people; making it one of the longest running Community Cultural Development (CCD) programs in the State.

Based in Collingwood, the program offers a flexible and welcoming space for young people to work in fully equipped art and music studios with experienced artists and musicians in order to increase social connectedness, self-esteem, foundation and employability skills and re-engage positively in the learning process. Based on readiness, young people can choose whether to engage in a short course, one on one mentoring, drop in to the open access studios to work on individual or collaborative projects or a combination of these.

Participants can choose where, what, when and how they will engage. This element of choice is integral to young people’s sense of empowerment, maintaining control over their own stories, artistic output and solutions. Dodgers artists sit with, work with, model and engage in a discourse that encourages young people to strive for artistic excellence.

The Gertrude Players, who operate in the City of Yarra, are a charitable organization raising funds for local initiatives. It was the third time that the Players came to the aid of the Dodgers.

James Haines of The Gertrude Players said “We’re currently working with the Artful Dodgers to provide youth with opportunities to pursue artistic endeavors, while being mentored by established Australian artists. It’s unreal.”

So committed is lawyer Haines, he and his wonderful Mum Margot visit the Artful Dodgers once a month providing delicious lunches at the studio’s Megaphone events, where participants are given the opportunity to hone their stage skills and share their music with the local community.

Coordinator of the Artful Dodgers studio Angeliki Androutsopoulos said the ongoing support of the Gertrude Players “is an amazing gift. It is not only the money they raise for us, but their belief in what we do which is so encouraging for not only our participants but our staff,” she said.

“They also run an event with military precision and the event went off without a hitch. Studio participants involved had a great time and put on terrific performances. The whole place was up and rocking out from the get go.”

The night featured live appearances by rocking covers band The Flares, from Australia’s first indigenous female PM Aretha Stewart-Brown (Indigenous Youth Parliament) and studio participants The Desolates and The Travellers. Musical journeyman Jesse Sullivan, who works with artists in the Artful Dodgers music studio, was also on hand to act as DJ.

The 20th anniversary celebrations continue for the Artful Dodgers with an art display and music performances. Celebrations kick off at the Melba Spiegeltent, 35 Johnson Street, Collingwood on Thursday the 2nd of November from 4pm – 8pm with special guests and long-time supporters, Killing Heidi. The exhibition of artworks will remain up for four days until the 6th of November.