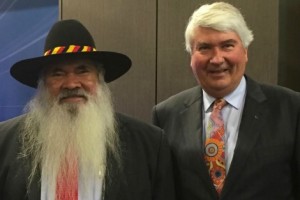 On 15 April 1991, 25 years ago this Friday, Elliott Johnston QC, Patrick Dodson and their fellow commissioners signed off on their final reports for the long running royal commission into Aboriginal deaths in custody.

That commission was set up by the Hawke government at the end of 1987 to investigate 99 Aboriginal deaths that had occurred in custody during the previous ten years.

When tabling the reports in Parliament, Robert Tickner, the Minister for Aboriginal Affairs, noted that of the 99, 43 had experienced childhood separation from their natural families through intervention by state authorities, missions or other institutions; 83 were unemployed at the date of their last detention; 43 had been charged with an offence at or before the age of 15; and only two had completed secondary schooling.

On Wednesday, Patrick Dodson on the eve of his entry to the Senate representing the Labor Party in Western Australia, addressed the National Press Club setting out very troubling statistics about what has changed and what has remained the same in the last quarter century.

Admittedly the number of Australians identifying as Aboriginal and Torres Strait Islander has increased similarly in that time. In the 1986 census, there were 227,593 people who identified as Aboriginal or Torres Strait Islander. In the last census (2011), there were 548,370. The Australian Institute of Health and Welfare estimates that there are now more than 713,600 Australians who are Indigenous. Having been 1.5 per cent of the population at the time of the royal commission, they are now 3 per cent.

At the very least, we as a nation need to admit that a person who identifies as Indigenous is just as likely to be in jail today as they were at the time of the royal commission — and ten times more likely than the rest of us. In that regard, nothing has changed.

The royal commission definitely improved the systems for supervision of persons in detention, reducing the risk of deaths in custody. It also led to better coronial procedures. But it failed to reverse Indigenous imprisonment rates and it did little to counter the underlying causes of Indigenous imprisonment.

Collins was convinced that the underlying causes of disproportionate Aboriginal imprisonment had adverse impacts on all Aborigines, especially those in remote communities.

On Wednesday, Dodson suggested one major change which has occurred in the last quarter century. At the time of the royal commission, he saw police as the main problem. Now, he thinks it’s the legislators who are the problem — attempting to be overly prescriptive to police and judges.

He pointed to serious issues in Western Australia and the Northern Territory, including mandatory sentencing laws and the NT scheme of paperless arrests which has received the green light from the High Court. Dodson offered a damning assessment of the legal system: ‘For the vast bulk of our people the legal system is not a trusted instrument of justice; it is a feared and despised processing plant that propels the most most vulnerable and disabled of our people towards a broken bleak future.’

He pleaded, ‘Surely as a nation we are better than this.’

It is good to see that the Australian Bar Association (the national body representing Australian barristers) has pledged to join a national campaign to amend or remove all mandatory sentencing laws, review fine default imprisonment, and invest in justice reinvestment.

It was distressing but ultimately reassuring to hear Dodson, the Father of Reconciliation and soon to be the nation’s most prominent Aboriginal politician, publicly telling his own people: ‘We will not be liberated from the tyranny of the criminal justice system unless we also acknowledge the problems in our own communities and take responsibility for the hurt we inflict and cause on each other.

‘Family violence, substance abuse and neglect of children should not be tolerated as the norm. And those that perpetuate and benefit from the misery caused to our people need to be held accountable.’

Having been a royal commissioner all those years ago and having remained engaged with grassroots communities, he was not offering any short term solutions to the underlying causes of Indigenous disadvantage and imprisonment.

But looking ahead to his role as a senator in light of his recent experience as co-chair of the expert panel on constitutional recognition of Indigenous Australians, he did put out this challenge to his new colleagues in Canberra:

‘The Australian parliament needs to be more open to the idea of engaging in a formal way with Indigenous peoples on matters that affect our social, cultural, economic interests, as well as our political status in the nation state.’

He is ready to subject himself to caucus solidarity in the Labor Party and to compromise in the parliament. When asked by The West Australian about the cashless welfare card about to be trialled in the East Kimberley, he told the Press Club:

‘It’s an attempt to deal with the set of circumstances at a regional level that people believe that’s going to deal with some of the social impacts that are occurring that they find difficult, troubling, concerning. It’s been devised by people in that part of the world, under the leadership of people from that part of the Kimberley.

‘I think the Labor Party would be open to matters where regional solutions are being worked through, where people’s rights aren’t necessarily being violated, but where there is a remedy brought about that will enable an improvement to the social circumstances. Sometimes you need some kind of a circuit breaker.’

While continuing to oppose such targeted, discriminatory measures as permanent arrangements, he conceded the need for some temporary arrangements and experiments, provided only they were sought by the local people and implemented with their consent.

This distinguished Aboriginal leader and proud Australian told us all, ‘We have a wonderful democracy.’ He will be an adornment to the Senate, and he may even help the nation address some of those underlying causes he identified as a royal commissioner a quarter of a century ago.

This article was first published on Eureka Street.