Every human being matters: celebrating World Day of Social Justice 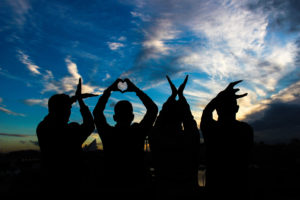 This year, the World Day of Social Justice is being celebrated in the wake of public anxiety about the justice system. In Melbourne, a man on bail killed and injured many people by driving at them on a city footpath. This followed a series of violent crimes, including carjackings, store robberies and bashings in which the perpetrators were identified as young African men.

The popular media responded by demanding harsher measures, including sentencing in adult jails, restrictions on bail and deportation of young offenders to their countries of origin. Justice was identified with strong policing, remand in custody, heavy punishments and loss of civil rights.

That reaction is understandable – people have a right to feel safe on the streets.  But it is too narrow and ultimately counterproductive. That becomes evident when we reflect on it from the perspective of the relationships that build good human beings and a good society. This is what social justice is about.

Social justice begins with the key insight that each human being matters and must be treated with respect, regardless of what they have done. People who commit crimes may rightly lose their freedom, but they never lose their right to be respected. They may never be treated as rubbish to be swept away.

The second insight is that no human being is self-made. To flourish we depend on one another. Imagine what your life would be like if you had to look after yourself straight after birth, educate yourself, build your own roads and trains, invent your own computer, start your own bank. We depend on one another, and so are responsible to one another. Our society, too, flourishes only if each member flourishes. No one is expendable.

These insights help us to reflect on how we should best respond to people who commit criminal actions.  The cries to lock them up and throw away the key are too simple. They do reflect the need of society to ensure that people are safe from violence and from theft. We help people flourish by ensuring that they are safe. One way of providing security is to detain people who pose a proven threat to others.

But respect for one another and for the person who committed the crime demands more of us. We must also help offenders to reflect on their lives, regret what they have done, and change their lives so that they can contribute to others in society. This means working with them while they are in jail and when they are moving back into the community.

It also means sending people to jail only as a last resort, because the evidence shows that people are more likely to reoffend if they have been in jail. Multiplying prison sentences for criminals protects the innocent from crime in the short term, but threatens them in the long term.

At Jesuit Social Services we accompany vulnerable young people. Many of them come from fractured families, have precarious mental or physical health, have had limited education and are unemployed. Many have come into contact with the justice system. They all need help and encouragement to connect with society. Here, administering justice well is a matter of social justice.

Written by Andy Hamilton SJ – Andy is a Jesuit priest and a member of Jesuit Social Services’ policy team.