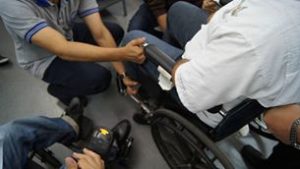 Jesuit Social Services recently provided a submission to the discussion paper of the Victorian state disability plan for 2017-2020. The Victorian state disability plan is a government policy framework for improving the way services and environments work for people with disabilities. Our submission, highlighted the issues for people with cognitive disabilities in the criminal justice system. ‘Cognitive disability’ refers to a range of conditions such as acquired brain injury (ABI), foetal alcohol syndrome disorder (FASD), intellectual disability, and borderline intellectual disability. A cognitive disability can vary significantly in severity, and some people may face additional difficulties such as a mental illness or physical health issues.

Our submission also highlighted the links between disability and disadvantage. In 2015, Jesuit Social Services along with Catholic Social Services Australia released the findings of its Dropping off the Edge Report (DOTE). DOTE looked at a range of factors, including the proportion of people aged 18-64 years in receipt of the Disability Support Pension in each area. Our research found that those living in 3 per cent of the most disadvantaged postcodes in Victoria are:

We endorse the intent of the government’s disability plan. We all have a responsibility to help remove the barriers that prevent people with a disability from having the same life opportunities as everyone else. Every Victorian should have access to the opportunities in life that will enable them to flourish – to complete their education, to get a job, to access safe and affordable housing, to raise their children in safe communities and to see the next generation thrive.