Transition to zero emissions future must include a focus on decarceration

Jesuit Social Services has launched a discussion paper arguing that in a world of worsening climate change, Australia’s reliance on incarceration is increasingly untenable. 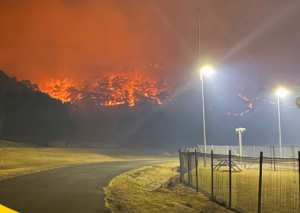 As a grassfire raged dangerously close to Central NSW’s Lithgow Correctional Centre in late 2019, local residents were evacuated and highways closed, but 400 Lithgow prisoners – around a quarter Aboriginal or Torres Strait Islander people – remained locked inside.

Our ‘Prisons, climate and a just transition’ discussion paper draws on the Lithgow story and others from across the country to make the point that marginalised people – and imprisoned people in particular – are some of the hardest hit in the face of worsening climate change.

Heatwaves already kill more people in Australia than all other extreme weather events combined, and experts are predicting that the number and severity of extremely hot days in Australia may in future make parts of the country uninhabitable. Our paper shares examples of extreme heatwaves causing health problems and creating conflict among people living in prison buildings that are not fit for purpose:

“Temperature control in the female area at [Launceston Reception Prison] was raised as an issue and the inspection team was advised that female prisoners were seen coming out of cells gasping for air and dehydrated in summer. The female cells back onto a solid brick wall, which is a heat conductor, and there is no air ventilation. Concerned correctional staff recorded temperatures of 37 to 40 degrees over two nights in summer 2016-17 with a thermometer provided by [a] nurse.”

We need systems that heal, rather than harm us

Alongside the effects of climate change on imprisoned people, our paper outlines the ways Australia’s reliance on imprisonment as a response to crime is ineffective, costly and discriminatory, disproportionately harming the most marginalised people in our communities.

Flowing from a history of colonisation and dispossession, systemic racism, intergenerational trauma and discriminatory laws and practices, Aboriginal and Torres Strait Islander people continue to be vastly overrepresented in Australian prisons, making up 29 percent of people incarcerated in Australia (30 June 2020).

High rates of reoffending demonstrate the ineffectiveness of prisons as a way to rehabilitate people and keep communities safe, with more than half of people released from prison returning to corrective services within two years (2019-2020).

Not only are marginalised people – and imprisoned people in particular – some of the worst impacted by climate change, but prisons are often ecologically damaging. They are built on large tracts of land, often cleared of vegetation, and produce large amounts of waste. A prison complex recently opened near Grafton, New South Wales is situated on approximately 195 hectares of land.

We argue that prisons should provide adequate facilities to protect people from the impacts of climate change, but more fundamentally, Australia should shift away from reliance on prisons:

“The most decisive action we can take to make our criminal justice system fairer, cheaper and more effective, as well as more ecologically just, is to stop building new prisons, reduce prison numbers and invest in keeping people out of prison in the first place.”

A just transition means moving away from prisons

We believe that a just transition to zero greenhouse gas emissions necessitates moving away from damaging economic and social systems, including Australia’s reliance on imprisonment:

“Instead of investing in prisons and designing harsher and more inflexible sentences, we need to resource prevention, therapeutic and restorative programs, and implement community-led alternatives to imprisonment that hold people accountable for their actions in a meaningful way.”

The August 2021 report by the IPCC (Intergovernmental Panel on Climate Change) highlights the threat to all humanity under a worsening climate. The urgent need for both serious climate action and investment in adaptation has never been clearer.

In a just transition, strong action on climate change must be coupled with action to ensure those most vulnerable to unavoidable changes in climate are supported to adapt, and Australia must actively support opportunities for marginalised people to identify and lead solutions to the challenges they are facing.

The discussion paper puts forward the following recommendations, including:

We call on governments to lead with courage by moving away from our current, punitive approach to justice towards more equitable and sustainable systems that heal our communities.