Support to no longer suffer in silence 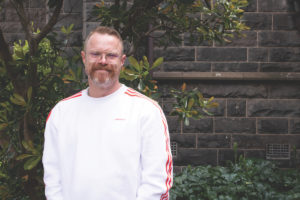 After Peter-Josef Miesen’s partner Des took his own life in 2015, Peter “suffered in silence” for months.

“I saw one or two doctors but they just wanted to give me anti-depressants. I took them but nothing made me feel better. In a way they made me feel worse – it’s not a chemical imbalance in my brain, it’s grief,” says Peter.

Peter and Des had been together for 19 years and Des’ loved ones, including Peter, were unaware he was suffering before his death.

“He never sought any help for mental health, he never said he was depressed. People often say to me ‘he must have been sick’ and I can honestly say I don’t know.”

About three months after Des died, Peter found himself “at the end of my tether” and struggling to manage his deteriorating mental health.

“I really thought I was going to self-harm and do something stupid to myself. I just couldn’t cope with the grief, the stress and everything associated to it,” he says.

Through a family friend, Peter found out about Jesuit Social Services’ Support After Suicide program.

Since 2004, the program has provided support including counselling, group support and online resources for people bereaved by the loss of a loved one, as well as delivering training to health, welfare and education professionals. In 2018-19, Support After Suicide directly assisted 913 children, young people and adults bereaved by suicide.

“I remember ringing the program and just crying – I couldn’t get anything else out. They told me to come in later that day and it was the first time I saw someone. All the pressure up until that point was unbearable.”

According to the latest data by the Australian Bureau of Statistics, more than 3,000 Australians took their own lives in 2018.

Meeting other people who had experienced a similar tragedy was an important step in Peter navigating the complex grief and trauma associated with suicide.

“I really needed the reassurance that I wasn’t the only person going through this because I really felt like it was so intense.”

Support After Suicide remains significantly underfunded. The program receives no state Government funding and there is a lack of certainty regarding ongoing funding provided by the Federal Government.