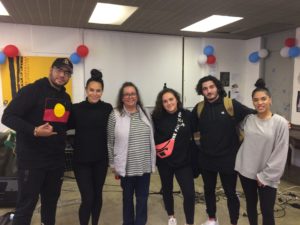 This year’s theme was Voice, Treaty, Truth. Let’s work together for a shared future.

Kicking off the week was an event organised by BP Australia featuring a welcome to country by Wurundjeri elder Aunty Georgina Nicholson followed by performances from the Artful Dodgers troupe. BP staff member and host Farhana Muna said “There was so much joy and soul in the room.”

After some great acoustic songs by Aaron B, Elijah and Olivia, then came time for the dance outfit The Indigenous Hip Hop Project (pictured) to bring the energy and got everyone moving.

The final event for NAIDOC Week saw Aaron B perform as a special guest artist at a fundraising night organised by law firm King, Wood & Mallesons, raising money for The Torch Project.

The Torch provides support to Indigenous offenders and ex-offenders in Victoria through art, cultural and arts vocational programs.

By embracing program participants as artists rather than offenders, The Torch provides an avenue to change. The Torch has been delivering the State-wide Indigenous Arts in Prisons and Community Program (SIAPC) since 2011.

In the crowd was leading lawyer and former Jesuit Social Services staff member Tony Kelly who said he had been very impressed by Aaron’s performance as was Victorian Ombudsman, Deborah Glass.

Aaron B and Olivia will get another major career break when they appear as special guests on the nationally televised indigenous Aussie Rules program Marngrook Footy Show.

For more information about speakers and performers visit www.justvoices.org.au