NAIDOC Week: Working together for voice, treaty and truth

NAIDOC week provides an opportunity for all Australians to join in celebrating the culture, aspirations and hopes of Aboriginal and Torres Strait Islanders, writes ANDY HAMILTON SJ.

It is never easy to see the world from the perspective of other people. If we are passionate about an issue, we become impatient with someone who argues a contrary view. We also find it difficult to enter the world of people who are imprisoned, mentally ill or refugees whom 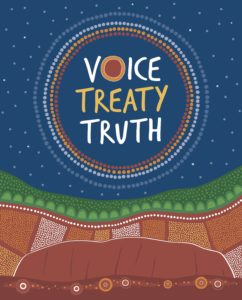 popular opinion regards as less than ourselves. We may need them to bang drums in order to encourage us to make us see and listen to them.

That is why the National Aboriginal and Islander Day Observance Committee (NAIDOC) week is so important. It emerged from the recognition by Indigenous Australians that they were neither respected nor listened to, and from their determination to change things. They thought it inappropriate to celebrate Australia Day on the anniversary of the arrival of the First Fleet, because that was the beginning of their dispossession. In the face of considerable opposition they began to organise. They drew up a petition to send to King George V to ask for Aboriginal electorates, but the Government saw it as outside its constitutional powers to provide them. In 1938 a Congress of Indigenous people met in Sydney. Its members marched on Australia Day, which they called Mourning Day. These were the origins of NAIDOC.

Australia Day is still celebrated on the anniversary of Indigenous expropriation, but NAIDOC week provides an opportunity for all Australians to join in celebrating the culture and aspirations and hopes of Indigenous and Torres Strait Islanders.

The theme of NAIDOC Week this year is ‘Voice, Treaty, Truth. Let’s work together.’ These words lie at the heart of the Uluru Statement that represents an Indigenous position reached after long discussion. It begins with the importance of voice. Indigenous culture, like all cultures, is built around language, in this case many languages. When languages die out cultures are put under great strain. Because Indigenous Australians are the first Australians with some 60,000 years of care for country, the preservation of their voice and languages in education and communities matters to all Australians.

Voice is also important in the sense that Indigenous Australians seek an institutional say on the matters that affect their lives. That demand is central to the Uluru Statement, and is captured by the second word of the 2019 Theme: Treaty. To appreciate its urgency we need think only of the catastrophic effects that such interventions by Australian governments as stealing and routinely jailing children have had on people and communities. There will be many legitimate differences of opinion about what shape that voice may take, but its need is not in doubt.

To understand the present condition of Indigenous Australians and to respond to their call we must understand the past. Truth is the third word of the Theme. Truth embraces the relationship between the Indigenous peoples, the first people, and the later people who dispossessed them by force, excluded them from their hunting grounds, stole their children and continue to jail them out of all proportion to the rest of the Australian population. The relationships also include, of course, the later people who have befriended and defended the first Australians, studied their languages and culture, and sought to build a more just Australia.

These peaceful and enquiring relationships underlie the hope embodied in the NAIDOC theme: Let’s work together. We at Jesuit Social Services, who include many Indigenous people among our staff members and the people whom we serve, endorse the theme of NAIDOC week. The words are simple and attractive, and are a challenge to us all.