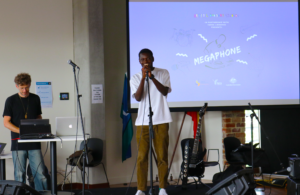 Artists Kanani performs a song from his new album while Jesse Sullivan, Music Studio Coordinator at the Studios, supports him

Formerly known as Megaphone Lunch, the monthly event that showcases young emerging musicians of the Artful Dodgers Studios in Collingwood is back stronger than ever thanks to a new partnership with Yarra City Libraries. Now called Megaphone, the first of an ongoing series of performances took place at the Bargoonga Nganjin, North Fitzroy Library last week.

Artists from the Studios, including Elijah Augustine, Aaron B and Kanani performed crowd favourites and new numbers to the first in-person crowd since before Covid hit last year. Georgia Nielsen of the Adelaide-based band, Pelvis, also gave a special guest performance.

The partnership between the studios and Yarra Libraries formed as an initiative of the recently created Yarra City Community and Wellbeing team. The new initiative hopes to provide post-Covid support to organisations and programs that have been affected by Covid by opening up their spaces for community building and wellness events.

Held in Bargoonga Nganjin’s top floor event space, artists performed to a mixed crowd of familiar fans and members of the local community. Refreshments were served throughout and chairs were placed around the room to allow for physical distancing. After the show, guests were invited to stay and enjoy the Library’s rooftop garden.