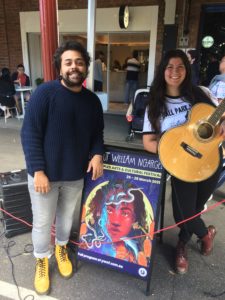 With the slow rollback of COVID restrictions live crowds are out and about once again enjoying Victoria’s legendary live music scene.

Amongst the performers who have turned out recently for their first live shows in over a year were three young indigenous performers mentored by the Artful Dodgers Studios.

Aaron B, Elijah Augustine and Olivia Meg all took part in the 2021 Yaluk-ut Weelam Ngargee Festival, which was recently held across the City of Port Phillip.

The festival, named after the local Yaluk-ut Weelam clan, part of the Boon Wurrung mob, featured free pop-up gigs around the City and sold-out concerts at Memo Music Hall and at the legendary Esplanade Hotel.

This year’s program was truly diverse and had something for everyone.

Amber Harris from the City Of Port Phillip’s Festival program said her organisation had been “more than happy” to link up with Jesuit Social Services Artful Dodgers studio and the young musicians involved there.

“The City of Port Phillip’s Yaluk-ut Weelam Ngargee Festival consisted of both online and physical events, the Festival was a huge success. Aboriginal and Torres Strait musicians popped up all around the municipality,” she said.

“We were pleased to profile Aaron B and Olivia Meg at the South Melbourne Markets on Sunday and Elijah Augustine in the Acland Plaza on Friday. These performers did a great job entertaining the crowds and were an important part of the event.”

Jesuit Social Services’ Artful Dodgers Studios, is a program of Jesuit Community College, is a flexible and welcoming studio space where marginalised young people can create art and music with the support of experienced artists and musicians.