Last night (November 2) we celebrated the 20th anniversary of our Artful Dodgers Studios at Melba Spiegeltent.

The event was a great opportunity to acknowledge some of the past and present participants, staff members and volunteers that have contributed to the Studios over the years. 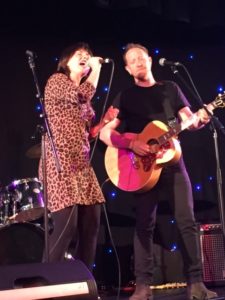 Artful Dodgers Studios was established as way to engage young people experiencing marginalization with creative pursuits such as music and visual art.

The Studios are a safe space for young people experiencing mental illness, or other multiple and complex needs, to work on creative projects. Participants also have easy access to the counselling and case management provided by our Connexions program.

Guests heard from Artful Dodgers Studios’ staff member Paulie Stewart about his work with young people, and how the Studios supports participants to not create art, but to increase social connectedness, self-esteem and employability skills.

A range of performers involved with the studios strutted their stuff on the Spiegeltent stage, including Lawrence Austin, Casey Teale, MissSta, The Desolettes, and hip-hop artists as part of the hip-hop showcase.

Guests were also treated to an acoustic set by Killing Heidi. Guitarist Jesse Hooper previously worked as a mentor at the Studios, and told the crowd that he saw Jesuit Social Services’ values of welcoming, discerning and courageous lived out every day in the participants he supported.

Thanks to all who attended the event and helped make it such a success.

Walking together in Willmot