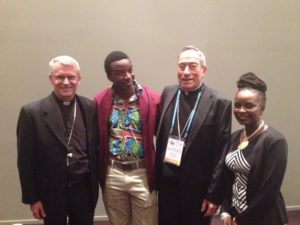 Representatives from Jesuit Social Services have taken a leading role in activities at the recent national National Catholic Education Conference in Perth.

With a conference message of ‘Faith to Lead – Lead to Faith,’ the event was attended by more than 1,300 Catholic educators from around Australia and the world.

Presenting a number of highly praised workshops at the event were Artful Dodger Studios ambassador and Flybz rapper Fablice Manirakiza, who recently won the Young Victorian Achiever of the Year Arts award, and Kayeve ‘Mimi’ Mireille who recently joined the JAYS speakers circuit.

Amongst the biggest fans of the two young Burundians at the conference was one of Pope’s Francis chief advisors and closest friends, Cardinal Oscar Andrés Rodríguez Maradiaga and the Bishop of Perth, Tim Costello.

Cheekily Fablice, who recently was invited to do a prestigious Tedx Talk, urged the smiling Cardinal to tell Pope Francis of The Flybz and the great work of the Artful Dodgers Studio.

Both Fablice and Mimi were also keynote speakers at the NCEC Youth Summit attended by Year 10 and 11 student leaders at Notre Dame University, Fremantle.

The purpose of the summit was to provide a formative experience for students in their faith and leadership skills and to provide opportunities for the students to foster their personal and spiritual growth through prayer, meditation and scripture, enhance their participation in the life and mission of the Catholic school community and beyond; and to understand what it is to live as disciples of Jesus..

Particularly powerful were the presentations at a number of the girl’s schools by Mimi, who is champion of girl’s rights in her homeland of Burundi through her innovative and educational radio show.

Students were super impressed she had been invited to Washington DC to talk of her work and had meet and shaken hands with Barack Obama.

Another highlight was the day spent at Aboriginal College Clontarf which houses Indigenous students from around the state of Western Australia and the two young Africans’ presentation at Whitford’s Parish Youth Mass, where they had the congregation hip hopping in the church.

Fablice was glowing after a week of presentations in Western Australia.

“My heart is just beating with so much love and gratitude to the people of Australia who have accepted me, moving here from Burundi was like going from hell to heaven.”

The headmaster of Prendiville College Mark Antulov said he wished to pass on his gratitude and love to Jesuit Social Services and in particular The Artful Dodgers Studios for supporting these outstanding young Africans.

“This the Flybz third visit over here and Western Australians just love them. Their message really has found its mark over here and I was because I involved in bringing Fablice and Mimi here, I am being swamped by requests for appearances. Next year we are looking at hosting the duo for at least two weeks in Western Australia at schools in Perth, Broome, Kalgoorlie and Albany have also requested visits.’’