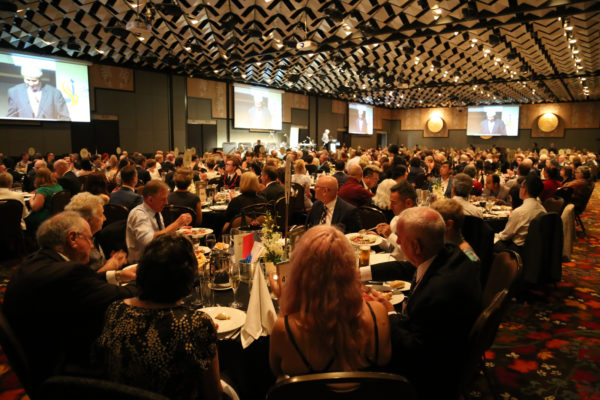 On Saturday night (March 25) we welcomed more than 530 guests to celebrate 40 years of Jesuit Social Services at our Annual Dinner held at Melbourne’s Sofitel.

The event was attended by past and present Jesuit Social Services CEOs, board members and staff members as well as donors, supporters and key stakeholders.

Guests were treated to a special performance by legendary singer/songwriter Archie Roach, who spoke about his recent work with young people in Victoria’s youth detention system.

“These children, they’re already damaged before they go into these lockups, these institutions. They’re already wounded. And we have to take care when we enter these places, because we’re entering places where people are inflicted and we need to give them something that will help soothe the wounds that have been inflicted upon them,” he said.

The annual Frank Costigan QC address was delivered by Senator Patrick Dodson, who spoke about the need for a fair and equitable criminal justice system that respects Aboriginal and Torres Strait Islanders, who remain vastly over-represented in our prisons.

Our CEO Julie Edwards announced a new initiative, The Men’s Project, at the event.

The Men’s Project aims to help men and boys live responsible, accountable and healthy lives, and will provide a central hub for ideas and actions as well as develop and implement new programs.

“We want to help lead a conversation about what good manhood looks like, and about social forces that influence this, and we want to work with men to achieve this,” said Julie.

The Men’s Project was welcomed by International Jesuit leader Fr Arturo Sosa in a video message, in which he said, “it is inspiring to see that you continue to dream of new ways of bringing hope to our violent, divided world.”

Around $38,000 was donated towards this cause, and we thank all those who made pledges for their generosity.

We also thank our corporate supporters Sevenhill Cellars, Bowens, Catholic Church Insurance, Alan Mance and Par Leasing for their support of the event.