Addressing insecure work must be accompanied by addressing disadvantage 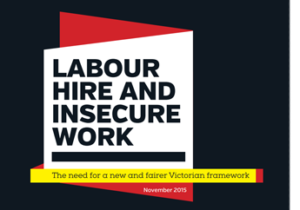 Last week, the Victorian Inquiry into Labour Hire and Insecure Work handed the Victorian Government its final report after receiving almost 700 submissions from individuals and organisations, including Jesuit Social Services.

We look forward to the report being made public in due course and commend the Government’s focus on improving the safeguards and supports for workers in Victoria, particularly for those who are more vulnerable and more likely to be exposed to exploitation in the workplace.

Those who are disadvantaged and vulnerable are not only more likely to experience insecure work, but are also disproportionately impacted by the negative aspects that come with insecure work, including underpayment, discrimination, and health and safety risks.

Young people, Aboriginal and Torres Strait Islander people, people from refugee backgrounds with limited English and people with disabilities are just some of the disadvantaged groups in the Victorian community who are vulnerable to workplace exploitation. In our experience, these groups are more likely to become ‘trapped’ in insecure work, often due to their lack of other employment options.

For highly disadvantaged jobseekers, the barriers they face mean that they are some distance from entering the formal labour market, let alone securing and maintaining decent work. We therefore argue that one of the key ways to address the problems associated with insecure work, is to first address the underlying causes of disadvantage and exclusion. We know, from Dropping Off the Edge 2015, that those living in the three per cent most disadvantaged postcodes in Victoria are 3.3 times as likely to be experiencing long term unemployment, and nearly three times as likely to have a low level of education.

Education plays a critical role in addressing many of the overlapping issues encountered by vulnerable and disadvantaged groups. People in the lowest socioeconomic areas are approximately 20 per cent less likely to attain their Year 12 qualification or equivalent. Many of these young people will then end up in insecure employment or unemployed. Addressing this inequality is perhaps the most fundamental change that would alter the life opportunities of disadvantaged people, and should be a priority of government.

We also note that exploitation is particularly rife amongst people on student visas and Working Holiday visas compared to 457 skilled worker visas. Foreign workers often face structural factors that make them vulnerable to exploitation including language barriers, and a lack of knowledge of the Australian legal system. A survey of 200 international students conducted by cleaning and hospitality union United Voice found that 79 per cent said they knew little or nothing about their rights at work, and 60 per cent earned less than the national minimum wage.

While we must have a strong system of industrial protections to tackle the problem of insecure work we must also invest in education and training of disadvantaged groups – in order to enhance their employment options and thereby reduce their vulnerability to exploitation.

We look forward to hearing the Inquiry’s recommendations when the final report is handed down, and continuing to advocate for the rights of those most vulnerable and disadvantaged groups.