We stand with refugees

The ultimate solution to the issue of refugees is to deal with the causes such as wars, persecution and poverty, writes Jesuit Social Services Board member LIBBY ROGERSON. 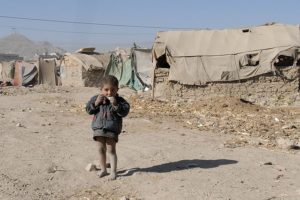 Despite the protestations of some nations and the evasion of others there is really no escaping the fact that the care and protection of refugees is a global responsibility. This year, as World Refugee Day approaches (June 20), the United Nations invites all people to stand with refugees (#we stand with refugees).

Brutal conflicts in Syria, South Sudan, Burundi, Democratic Republic of Congo, Yemen and others force people to seek safety within their countries or across borders, while a very small proportion take to boats in search of a more permanent refuge. Former Secretary General of the UN, Ban Ki-moon, reminded the member states that our response to refugees must be grounded in our shared values of responsibility, sharing, non-discrimination and human rights and in international refugee law..

Confronted by the never-ending loss of life on the Mediterranean, (5,000 in 2016) and the waves of people moving from Syria, member states of the UN are working to develop two Global Compacts – one on migration and the other on refugees. Their aim is to provide a structure which enables safe, orderly and regular migration and a framework which will ease the pressure on countries hosting refugees, enhance the self-reliance of refugees, expand access to third countries and support the safe and dignified return of refugees to their countries of origin.

Given the current unprecedented numbers of refugees and internally displaced people no country can manage on its own – collaboration between countries of departure and destination is crucial. Strengthening international cooperation will provide greater support for refugees and work against their exploitation by people smugglers, described by one UN spokesman as “the travel agents of death.” The hope is that by early 2018, after the many meetings and discussions, the High Commissioner for Refugees will present to member states a Global Compact on Refugees for discussion and agreement.

The 1951 Refugee Convention, drafted in the wake of World War II, focussed on people fleeing conflict or persecution because of race, religion and political views. In no way could they have anticipated the complexities of the C21st where people are fleeing rising sea levels, escaping the devastating aftermaths of natural disasters, threatened by criminal gangs or subject to torture because of gender.

A panellist at the UN thematic sessions on migration pointed out that 25 million people each year, one person per second, are displaced by natural disasters. At least 200,000 Haitians have left Haiti in the aftermath of the earthquake and are unlikely or unable to return. In a passionate speech to UN member states a representative of Red Cross Red Crescent said that “the needs of those who don’t fit the refugee definition must be addressed.”

One group of refugees, not covered by the Refugee Convention, is those forced to move by climate change. The Small Island States, such as Tuvalu and Kiribati are losing coastal land and fresh water as sea levels rise and king tides become unpredictable. Farmers and herders in parts of East Africa are suffering unprecedented drought and famine. As their cattle die and crops fail they move across borders and into cities in order to survive.

A member of the Swedish Mission to the UN called for a UN High Level Representative to lead a response to climate change and offered to help fund such an initiative. Greater international collaboration is needed to fund early warning systems for cyclones, tsunamis and to support a sustained and effective rehabilitation of areas after natural disasters. Wealthier nations have to be more generous in their support for developing the capacity of countries to cope with natural disasters and establish effective prevention measures.

The ultimate solution to the issue of refugees is, of course, to deal with the causes – wars, persecution, poverty, natural disasters, violence and climate change. While the UN and regional bodies have not been so successful in dealing with intractable conflicts in the Middle East and Africa, support for the Paris Agreement and the Sustainable Development Agenda has the capacity to build resilience, strengthen the economies of countries and provide social protection for the most vulnerable.

This will not happen overnight and requires the whole hearted commitment, not only of nation states, but of the private sector and civil society.  The Paris Agreement on Climate Change and the Sustainable Development Goals provide frameworks for a hopeful and positive future. If these opportunities are ignored, then the near future is looking very bleak for some and in the long run for all.