The next Victorian Government must commit to solutions to fix our broken youth justice system – including a rollback of regressive sentencing practices, raising the age of criminal responsibility from 10 to 14 years and investing in diversion programs, writes Jesuit Social Services’ Policy and Advocacy volunteer AARON BATCHELOR. 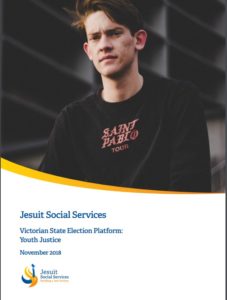 Youth justice is at a crossroads in Victoria. This state was once well regarded, nationally and internationally, for its comparatively low incarceration rates and effective diversion and rehabilitation programs when tackling youth crime. In the last decade we have seen a decline of this trend, with an increase in punitive attitudes resulting in harsher policies and more young people being locked up.

This attitudinal change can be seen in the current political landscape and is the result of misinformed media sensationalism around declining behaviour and increasing violence of young Australians. These perceptions remain prevalent despite the fact that statistics are showing that youth offending in Victoria has been dropping for nearly ten years now. According to the Australian Bureau of statistics ‘Recorded Crime – Offenders, 2016-17’ report:

In the midst of Victoria’s upcoming state election, Jesuit Social Services calls upon both major parties to commit to solutions to fix our broken youth justice system. We call for the development of a 10 year plan that approaches the issue with a clearly articulated vision that guides all policies, programs and procedures.

This vision should focus on early intervention and diversion, preventing young people from further contact with the justice system, using child-specific approaches and engaging families and communities.

When detention is necessary, the focus needs to be on strong education, addressing problem behaviour and underlying needs and building social and practical skills through programs that prepare young people for reintegration into their community.

Currently, 58 per cent of Victoria’s youth justice budget is spent on custody, 26 percent on community supervision and the remaining 16 per cent on rehabilitative, diversionary and community based support services. This current funding structure needs to be inverted.

It is also critical that Victoria’s next Government initiates a rollback of regressive sentencing practices such as mandatory detention and focus on setting and monitoring targets to reduce the number of young people offending, reoffending, on remand and in detention. This must be guided with a better use of data and stronger investment in research and evaluation; not populist rhetoric.

Jesuit Social Services strongly advocates for increasing the age of criminal responsibility from 10 to 14, as primary school age children have not developed the social, emotional and intellectual maturity necessary for criminal responsibility. Children detained between the ages of 10 and 14 are more likely to have sustained and frequent contact with the justice system throughout their lives.

We also call for the restoration of the dual track system for 18 to 20 year olds to serve custodial sentences in youth detention instead of adult prison, and that the system expand its operation to include young people up to 24.  We also advocate for a change in harsh sentencing practices and tight bail restrictions to decrease the number of young people in detention and being held on remand.

We also propose that more money be invested in diversionary programs so they are accessible state-wide at every point in the justice system, and that in-detention and transition support services also receive a similar boost in funding. This is particularly crucial for Aboriginal and Torres Strait Islander people, who are still grossly overrepresented in our justice system. To address this, we need greater investment in Aboriginal Community Controlled Organisations that assist Aboriginal and Torres Strait Islander young people at all stages of the justice system.