Jesuit Social Services - There's room at the table for the poor ... if we make it

One of the most misused passages of Christian scripture tells us we shall always have the poor with us. That is a statement of fact, often repeated by those who are not poor in order to dismiss any project that involves public expenditure or private generosity to people who are poor.

They mean there is nothing odd in seeing homeless and hungry people in the streets while trucks go by loaded with food to be thrown out. They mean nothing is out of place in a society where some people buy $5 million dollar while others sleep hungry on the streets.

When we do not focus on the good or bad conscience of the observer but on the lives of the people who are poor, we can see that the statement ‘We shall always have the poor with us’ is not a justification for a modern society that allows people to live in poverty. It is an indictment.

The truth is that there is enough food in the world to feed the world’s population, enough wealth in the world to bring food to those in need of it. People are not poor and do not go hungry because there is no food. People do not live in the streets because there are no buildings; a child need not lack clothes unless her mother does not eat today.

They are forced to live in this way because as human beings we lack the attentiveness, the compassion, the wit and the persistence to cooperate in order to feed, house and clothe them. That the poor are always with us is not an unavoidable fact of life but the result of human failure.

One of the reasons why poverty persists is that we regard the relationships that entrench poverty and wealth as outside our control. We turn the decisions we make about the making and keeping of wealth into laws of nature. 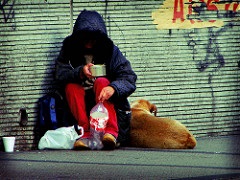 In the 19th century the British government condemned many Irish families to starve because to give food relief would interfere with the workings of the market. The decision was defended as upholding the natural order of things: it was regrettable but necessary. In fact it simply said that private gain was more important than children’s lives.

Today poverty and hunger continue to call into question our priorities. Of the disadvantaged people whom we serve at Jesuit Social Services, three quarters are receiving government benefits, almost half have mental health issues, a significant number of those under 25 receive no income, a fifth have a disability, and only ten per cent are employed. Over a third are homeless, half of whom have children.

If we translate these figures into the faces of vulnerable young people, our friends, you can understand their fear and our grief at the voices that wish to cut further what inadequate benefits they receive and impose on them conditions they cannot keep.

The great poverty engines of our time are environmental degradation, war and inequality. War sucks up funds that could be spent on schools, mental health programs and support for poor families and their children. The degradation of the environment will deprive millions of water, food and a world to live in. Inequality allows the wealthy to profit from the despoiling of the world, to endorse wars and to avoid meeting the eyes of the poor.

Anti-Poverty Week invites us to recognise the human face of poverty in our society and its costs to the people who endure it, no matter how gallantly, and to pledge that we shall never resign ourselves to saying helplessly that the poor will be always with us.