The beat goes on

Activities at the Artful Dodgers Studios in Collingwood have kicked off with a bang this year. 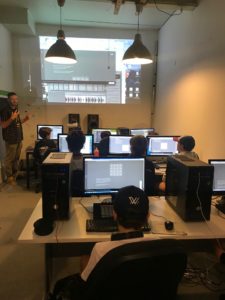 During the school holidays, a keen group of Xavier students attended a beat making workshop at the studio held by resident producer and musician Jesse Sullivan.

An accomplished composer in his own right, the affable Jesse showed the boys the finer aspects of recording a modern hip hop tune using specialised beatmaking software and Ableton Launch-pads.

The boys were quick to praise the music making fun.

“It looked hard at the start, but Jesse made it easy. We even got the chance to use the recording studio” said Sam, aged 13.

“It was heaps easier than it looked and I’ve made my own beats!” said Jonty, aged 12.

Jesse praised the visitors saying “they were keen, very energetic and very open to listening to new ideas. A definite couple of record producers in the making for sure.”

Meanwhile, the Just Voices Speakers Program run out of the Artful Dodgers has a number of interesting new additions this year including rising hip hop star and workshop guru, Adrian Eagle and Eunhee Park from North Korea.