We oppose the Bill and urge its rejection. We believe that the Bill denies people basic human rights and will place vulnerable people at serious risk of harm or death.

Our four main areas of serious concern include:

We call upon our Government to adhere to the following principles in all policy and legislation relating to people seeking asylum: 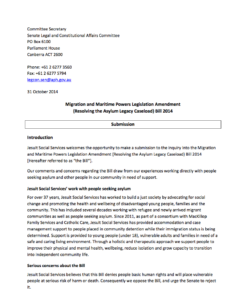