Spotlight on restorative justice in Darwin

On October 20, Jesuit Social Services celebrated its 40th anniversary in the Northern Territory. With a spotlight on Restorative Justice, more than 70 people gathered in Darwin at a breakfast forum to hear about embedding restorative practice into the justice system. 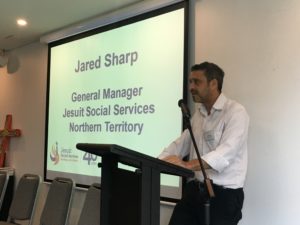 The event kicked off with a cheerful and flamboyant Welcome to Country by Ali Mills, a Larrakia Elder, who entertained the audience with a song as part of the Welcome.

This was followed by some reflections by Aunty Pam Pederson on her experiences in the Koori Court in Victoria and the benefit that such a setup would bring to the Northern Territory.

Aunty Pam’s reflections were followed by a panel on group conferencing featuring Lynette Hansen – a victim of crime who participated in a Palmerston group conference, Simone Clagnan from Victims Support Agency in Victoria whose role is to provide support to victims in group conferences, Kim Mulholland who provides cultural mentoring to young people during and following group conferences in the Top End and Delsey Tamiano – the Senior Youth Engagement Officer from Danila Dilba who has been a key partner in Jesuit Social Services’ Group Conferencing program this year and has been able to link in a number of young people into health and other support services following conferences.

This dynamic panel was able to highlight the many aspects of group conferencing and its transformative nature including the challenge for young people in facing their victims, the therapeutic impact on victims to have a voice in the justice system and the capacity of this interaction on young people to make better futures for themselves.

Jesuit Social Services CEO Julie Edwards also spoke at the event of the history behind Jesuit Social Services’ work in the Northern Territory. In particular, she shared insights from our organisation about restorative justice in how it can balance the needs of offenders, victims and the community to repair the harm caused.

Jesuit Social Services would like to extend our thanks to all those who attended the event and hope to see the NT justice system fully embrace restorative justice into the future.