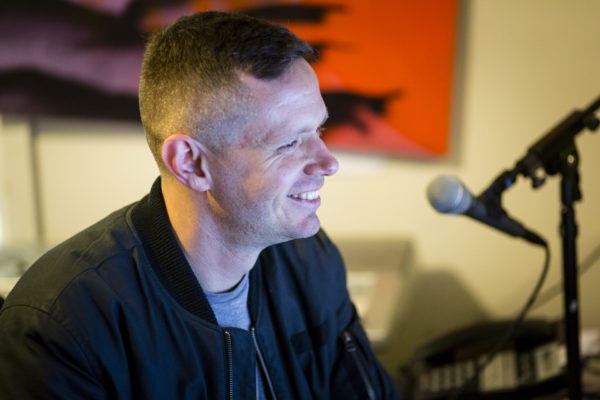 If sorry is one of the hardest words to say, can singing make it simpler? For Jesse Sullivan, a Community Cultural Development artist with our Artful Dodgers Studios program, the answer is yes. Through music, Jesse helps young offenders make sense of their situation and how their crime has impacted others.

How apology songs happen in the justice system

Young offenders are referred to Jesse though our Youth Justice Group Conferencing program. The program creates dialogue between young people who have offended, their victims and the wider community. It also gives the young person a chance to apologise for their offence – an opportunity that’s sometimes taken up in the recording studio.

Jesse recorded his first apology song with a young offender back in 2015. He remembers the young man as a talented guitarist and singer, who’d penned lyrics and music with the support of his Group Conferencing caseworker. Jesse says the recording was used as part of court proceedings and also given to the victim. It’s a song that’s stayed with him.

“It was a really nice song. It reflected on what he’d done, that he was sorry, and the different reasons why he might have done it.

“It explored the things that were going on in his life, and also reflected on where to from here. It was very much directed at the victim.”

Writing and recording an apology song

Jesse’s main role is to provide feedback on songs’ lyrics and structure and to get the best performances out of people. He emphasises that the writing and recording process differs depending on the young person. Jesse tailors the process to each individual, taking into account what they’ve done and where they’re at in terms of understanding their offending.

“One young person felt really bad about what they’d done, their remorse was palpable and they really wanted to move their life in a new direction. Another young person was still coming to a sense of responsibility and that process took longer. We met four or five times, and you’d see the seriousness of what had happened and what was taking place sinking in as the song progressed.”

For Jesse, recording music with young offenders is a matter of making sure the message is clear.

“It’s an apology, so you need to make sure that there’s some reflection on what happened. Part of that is with the young person accepting responsibility for what they’ve done, apologising, and feeling regret and remorse,” says Jesse.

Thinking about a song’s audience

Jesse also encourages young people to consider their audience carefully. He once recorded a rap to be heard by a judge as part of an appeal for a minor sentence. Factoring in an adult listener’s level of interest in rap and avoiding negative aspects of the genre was an important part of the process.

“Hip hop is the kind of music that’s anti-authoritarian, yet you’re doing the music in a very authoritarian situation where the judge is in a justice context. So, avoiding ‘tough guy’ kind of talk that’s normally in that genre. While it might be okay in other contexts, this one needs to be quite humble.”

Jesse says the mood in the studio is heightened by the need to talk about the young person’s offence. He manages the emotion in the room by focusing on the message and how it’s going to be received. With Jesse’s support, young people are encouraged to consider the weight of their words and potential interpretations of them, too.

“We’re not just writing naff stuff about ‘let’s make up and be friends’. We’re talking about these issues as they are, as real things, and about the message that’s left in a song when you make it and put it out there. You can’t really take it back or change it.”

Apology songs as a linked-up approach

Jesse’s work is an example of how different programs at Jesuit Social Services link up to support participants. Jesse says that communication and understanding between all programs is key to this approach.

“Group Conferencing staff are really familiar with Artful Dodgers Studios. We communicate a lot. They know the kinds of things that we do and the kinds of people we can handle. They know what to expect and they know it’s a safe place for young people to come.”

Being open to new ways of doing things, with a focus on the participant, is also important. Jesse says that putting an apology into song takes ‘out of the box thinking’ to see song as another way to reach an audience.

“It’s not just us designing programs going, ‘Here, do this’. It’s more like, ‘Okay, you have this particular need, and we have a service actually that can meet that’. So anyone who’s got that musical skill and wants to be creative can incorporate that.”