When Rashid (not his real name), a participant of Jesuit Social Services’ settlement programs, was offered the opportunity to travel to Canberra to meet with a number of federal MPs late last year he took it with both hands. 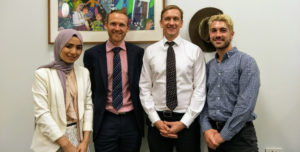 “I was very happy to be asked to go to Canberra and meet with a number of politicians, to represent my family and share my story,” he says.

Rashid, a Hazara refugee from Afghanistan, arrived in Australia almost 10 years and became a permanent resident. The next year, he applied for his family to come to Australia under the Special Humanitarian Program but was told the wait could be up to a decade.

“Being apart from my family for so long was very upsetting to me, it affected my health and my happiness,” he says.

Fortunately, after years of waiting, Rashid’s wife and children were able to relocate to Melbourne in 2017.

The campaign calls for greater reunification of refugee families to foster greater social cohesion. As part of the campaign, a phone poll was conducted by ReachTEL which showed that 75 per cent of Australians support greater access to family reunion for refugees.

Rashid joined staff from Jesuit Social Services and RCOA to meet with key immigration spokespeople including representatives from Labor, the Greens, the Nick Xenophon Team and advisers from the office of the Prime Minister.

“I shared my story with them and it was powerful to see them listening to hear what my family and I have been through. Everyone I met was very friendly and they appreciated hearing my story.

“Refugees living in Australia have a lot of issues to bring their families here. People are traumatized and have been through so much before they arrive in Australia. Being separated from their family makes things even harder,” Rashid says.

Rashid felt his day in Canberra was a success, and hopes that it may lead to more humane policies that ensure others aren’t forced to endure years separated from their families.

The show goes on