It was a cold, crisp morning in Alice Springs. A friend and I were at the supermarket, picking up camping supplies, with plans to head out to Tjoritja (the West MacDonnells) for a few days. 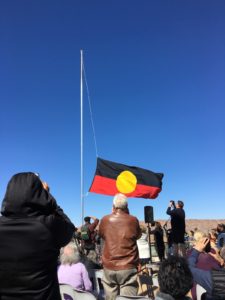 One of the first things I learnt in Alice was that you can’t go to the supermarket without running into someone you know. Even if you’ve only been there two days and know all of three people in the town.

Sure enough, rounding out of aisle six I bump into John Adams – our General Manager of Central Australia.

We chat about the drive up and plans for my first week of work in Alice. As we go to say goodbye John mentions, “You know the flag raising is on this morning? For the opening of NAIDOC week – 11.45 on ANZAC Hill.”

And so we load the shopping into the car and find a sunny spot at the café on Todd St to kill some time. Around 11.30 we start the walk up to ANZAC Hill.

The late morning sun is gathering strength, but with a strong wind blowing it’s still pretty chilly when we reach the top of the hill. I realise my choice of shorts for the day was a bit ambitious and – looking around at the beanies and polar fleeces of the slowing gathering crowd – it certainly gives me away as a sun-deprived southerner.

I spy John and we head over to chat. A Territory man since 1994, John gives me the run down on the who’s who in Alice. Out of the corner of his mouth and with a nod of his head he points out the Deputy Mayor, the Minister and the media man.

My second lesson – related to the first – is that everybody knows everybody in Alice. But the conviviality of the kind on display here, in the pre-ceremony hub-bub, masks divisions that run long and deep.

“You know this’ll be the first time the Aboriginal flag has flown here, don’t you?” says John.

I sat back, stunned, and took in the scene with new eyes. As the weight and expectation of the day sunk in, I was humbled to be there.

A symbol of Aboriginal strength, the Aboriginal flag was designed in 1971 by Harold Thomas, a Luritja descendant from Central Australia, born on the banks of the Todd River. Its design was inspired by the sunrises and sunsets that Thomas knew so well, seen from this very hill.

The first motion to fly the Aboriginal flag, alongside the Australian and Northern Territory flags, was put to the Alice Springs Council over 30 years ago. And for over 30 years, each motion has been almost unanimously rejected – despite petitions from Traditional Owners and endorsements from the RSL and Department of Veteran Affairs.

In March this year, Councillor Catherine Satour, an Arrente woman, tried again. And this time, the motion was successful: the Council narrowly agreed to fly the flag for ceremonial occasions like NAIDOC Week.

After the smoking ceremony, under a brilliant blue sky, Councillor Satour stood to address the crowd.

With candour and strength, she made it clear that it had not been a vote easily won. And with those who voted against the motion standing by the stage, it was clear that the road is still long.

But for now, as Aboriginal Vietnam Veteran Geoff Shaw raised the flag, the excitement and pride in the crowd was palpable. The flag lifted on the wind, and you could feel people’s hearts swell with it.

As the crowd dispersed and headed off to the barbeque, Elin and I were handed a flyer for a story night –women and men, by the campfire, talking about the women who had shaped their lives, in celebration of this year’s NAIDOC Week theme, Because of her, we can.

With the afternoon creeping on, we thought ‘when in Alice!’ and decided to postpone our camping trip so we could join.

That evening as the sun set pink on the hills, we wandered down to a small yellow shed behind Todd St Mall. On the grass in front of the shed, there were chairs set out and fires burning. My third lesson for the Territory was that barbeques draw crowds, and slowly but surely, the people streamed in.

Elin and I pulled down our beanies, drew up our socks and sat down somewhere up the back.

The evening’s panel featured five women and one man, all Arrente mob, both young and old. In turn, each of them shared their stories of the women who had shaped them.

Much of the evening was spoken in Arrente, the first language here in Mparntwe – the place we call Alice Springs. The evening had been organised as part of the Apmere angkentye-kenheproject. Meaning ‘a place for learning’, the project has converted the yellow shed as a place for Arrente families and communities to share language knowledge. Panels on the wall of the shed told the timeline of language loss, but also of survival and revitalisation – spearheaded by the strong women we were listening to that night.

The yellow shed and events like the story night were also a place for non-Aboriginal people like Elin and I to encounter language – and experience how that encounter affects our relationship with people, place and power.

As I sat there, I reflected on the things that shape our sense of belonging. Street names, flags, monuments, ceremonies – they all write a story about a place, and our own place within it. But under that is something deeper. Those things may write one history over another history, but they don’t erase it.

I sat there, and watched these women claim their power and share their culture – and in doing so share their strength with their children, grandchildren, sisters, brothers.

In May this year, the largest delegation ever of Aboriginal and Torres Strait Islander people came together from across Australia and, through the Uluru Statement of the Heart, articulated their aspirations for a fair and truthful relationship with Australia, built on justice and self-determination.

They called for truth telling. And the truth is we are living on stolen land. The sovereignty of Aboriginal people has never been ceded, yet the denial of that fact by our history books, many of our politicians and perhaps still in our own minds, is the root of the continued injustice experienced by First Australians.

The work we do as Jesuit Social Services with young Aboriginal people caught up in the justice system, is the pointy end of a bigger story that we all have a part in reshaping.

And things are changing.

In Victoria and the Northern Territory our governments have taken the first steps towards Treaty. In Melbourne earlier this year, thousands marched in solidarity with Aboriginal and Torres Strait Islander people for whom Australia Day is not a day of celebration, but a day of mourning.

Through social media, and increasingly through our mainstream media, we have access to Indigenous voices telling their stories in their way. The public is hungry to learn from books like that of author Bruce Pascoe that are challenging our understanding of Australia’s pre-colonial history.

As non-Aboriginal people, it is up to us to educate ourselves about the truth of our shared history. This is the first step towards imaging our shared future.

After the story night, Elin and I wandered back in silence to the Alice Springs Tourist Park.

In the morning, we headed back to the supermarket to pick up some last minute things. As we drove out of town I looked up at hill to see the Aboriginal flag flying high on the hill. As it should.