Reconnecting with parenthood after prison

Through Jesuit Social Services’ ReConnect program, Peter found the courage to ask for help leaving prison. He spoke to SEZ WILKS about the rewards of being a dad after five years inside. 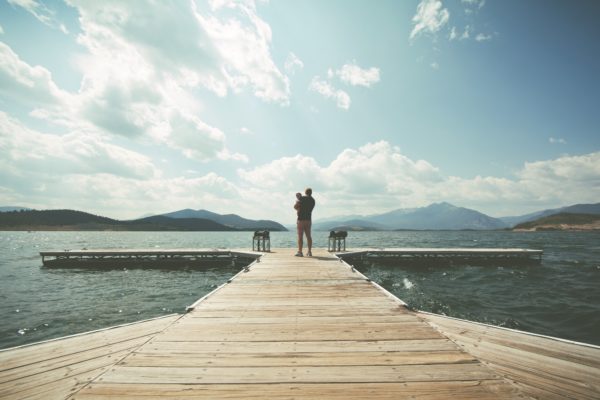 As a kid, Peter* envied children who had curfews. After school he and his mates would play freely, but as dinner or sunset approached the other kids would retreat to their family homes. Peter was the only one who didn’t have to be home by a certain time.

“The other kids’d hate it, but I’d be jealous. My dad died when I was young and I was left with a step-dad who was there, but wasn’t. At the end of the day I could do what I want.”

Peter believes that not having limits as a kid was one of the main reasons he ended up in prison. He spent around five years in and out of jail, breaching parole and struggling to find the support he needed to help get his life on track. Now in his mid-30s, Peter has successfully moved from prison back into the community with the support of our ReConnect program.

“I got involved in ReConnect by doing a course at Barwon Prison, and Elle [ReConnect caseworker] was the teacher. The course was about when you get out, the sort of things you need help with. When I was leaving prison I stayed involved with her through the program to get a bit of support on the outside.”

Adapting to life outside prison

For people leaving prison, adjusting to life outside can be challenging on every level. Peter had to learn how to deal with bills, get his licence and nut out how to travel to his appointments. One memory that sticks with him of leaving prison the first time is feeling overwhelmed by peak hour public transport.

“In prison, say you get an appointment, everything’s a two minute walk. It’s not like you’ve got to travel 25 minutes. Once you get out you have to go here and go there, and sometimes it can break you.

“When I first got out after the five years I’d done, I jumped on a packed train in the morning and started having a panic attack and had to jump off. It really freaked me out. Even though you’re surrounded by people in prison, they’re not all there at one time.”

Reflecting on that first time leaving prison without support, Peter sees that “it all became too much”. He felt overpowered by the stress of transitioning back into the community and broke a condition of his parole. When he was sent back to jail, it took courage and resilience to try again.

“Next time I got out I thought, ‘I’m gonna use everything I can to help me, to prevent that from happening again’. I needed it 110 per cent. Because prisoners, we can be stubborn. It’s hard to accept that help. But when you finally do accept it, and realise how good it is and how much you need it, it’s great.”

How ReConnect helps offenders plan for the transition

Peter says the support he received from his ReConnect caseworkers was vital to his successful exit from jail. Life in prison can make it hard to speak to people, but Peter says his ReConnect caseworkers were down-to-earth and easy to communicate with. They spent time talking with him, and helped him to see things from a different perspective. He became open and honest about the stresses of being back in the community, and also able to acknowledge what he’d done well.

When the next time came for release, Peter was ready. His ReConnect caseworkers helped him find housing and kept in touch during the transition, even when he moved out of the program’s catchment area. Knowing that his caseworkers were always there if he needed someone to talk to was a comfort.

“It’s the best support I’ve ever had in my life. When I found out I’d been offered the house it was awesome. It made me cry, because I’ve never had so much good support like that. Honestly, I wouldn’t be where I am today if it wasn’t for them.”

The sense of homecoming grew as Peter was awarded full-time care of his son. His son moved in, and Peter became a single dad for the first time. Soon after, he began to see positive changes in his son’s behaviour.

“My son was starting to play up a lot at school. He’d been expelled from one primary school and was probably on his way to get expelled from the next. But he’s only been in trouble once the whole time he’s been with me. It’s gone from nearly every day in trouble to once in the past three or four months. It’s been awesome. I’m proud of him.”

Peter attributes his son’s improved behaviour to their closer relationship, which he says is in part due to him being a calmer person. He also sees his son responding well to being asked about his day at school, and what he’s been up to.

“I think that’s what was missing the whole time in his life: someone to take an interest in him. That’s what made him play up. Even though he had all this love and support around him, in his head he was thinking, ‘Nobody cares, I’ll just do what I want’.”

Peter’s future looks bright. He’s focused on keeping his son at school full time and getting his truck licence so he can go back to work. He’s optimistic about giving his son the limits and boundaries he never had. And he’s hopeful that others in prison will be brave enough to engage with ReConnect.

“Instead of being the tough guy, just take your mask off for a second and accept the help. Don’t be afraid to say, ‘I need help’, because it is there. I’m so grateful for it. It’s all lined up. Life’s never been better.”