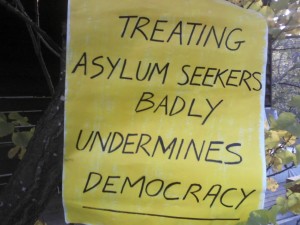 In recent days the plight of the people whom Australia has despatched to Manus Island has twice been highlighted. The Four Corners program on the death of Mr Hamid Khazaei displayed in horrifying detail the negligence, indifference, lack of urgency and priority given to following bureaucratic procedures over the value of a human life.

The decision of the Papua New Guinea Supreme Court of Justice that the detention of asylum seekers and refugees on Manus Island is unconstitutional, and its demand that the PNG and Australian Governments immediately cease and prevent detention attacked the source of moral infection that led to Hamid Khazaei’s death. The court’s finding is shaming for Australians to read.

The case dealt with a Constitutional amendment that the PNG Government passed in order to legalise the Manus Island detention scheme. The Constitution allows such amendments, on condition that the proposed law ‘is reasonably justifiable in a democratic society having a proper respect for the rights and dignity of mankind’.

The court found that the detention on Manus Island was not justifiable in such a democratic society.  It is hard to imagine a decision more shaming for Australians, who would generally assume unthinkingly that Australia is a much more democratic society than PNG.

The Four Corners program and the Supreme Court decision came as Australia heads towards an election in which both parties compete to be more most brutal to people who seek asylum. So it is unlikely that the Government or our compliant media will give much weight either to Hamid Khazei’s manner of dying or to the court ruling. As it did for Channel 9 in Lebanon, we may assume that money will enable business as usual.

But this is now part of our history: the way in which we conspire with PNG to treat people has been found by its supreme court to be not ‘reasonably justifiable in a democratic society having a proper respect for the rights and dignity of mankind’.

We carry the stain of that finding and of our policy. The stain Mr Khazei carried was his life’s blood.