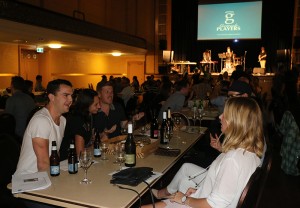 ”Trivia & Tunes 90s Rock” was held at the Collingwood Town Hall and attracted more than 300 patrons and also most    importantly raised significant significant funds for the ongoing work at the Dodgers.

The Gertrude Players are a charitable organization operating in the City of Yarra who raise funds for local initiatives. It  was the second year in a row the group have teamed up with the Artful Dodgers studio which provides marginalized y  youth with opportunities to pursue art and music, while often being mentored by established Australian artists.

Artful Dodgers Arts & Culture Coordinator Marianna Codognotto said participants and staff of the Artful Dodgers studio were ”really blessed and lucky to have such loyal supporters as The Gertrude Players.

”The Players are incredibly well organized and have a great support network so it makes working on a project with them a joy.

”It am really looking forward to working with them again next year,”

The Gertrude Players main event each year is ”The Big Sing”, an old-school carols event in the streets of Fitzroy just before Christmas.