Jesuit Social Services - Pianos Are Us 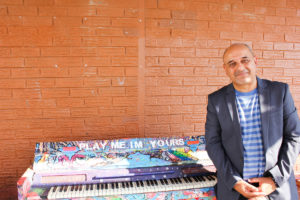 Pianos Are Us artist Tadros Hanna.

Before emigrating to Australia from Egypt in 2015, Tadros Hanna worked as an architect and interior designer. When he found himself unable to practice his profession in his new country, he turned to visual art as way of making meaning and connection with his new community.

Tadros received support from Jesuit Social Services Settlement Program, which linked him with services and programs to help him successfully settle in his new country. Through the Settlement Program, Tadros became a participant in the Diversity Through the Lens project, which supported participants to take photos that documented a sense of community connectedness, sharing themes of harmony, diversity and belonging.

In February 2018, a piano painted by Tadros was featured in the Play Me, I’m Yours exhibition, which has seen over 1850 pianos installed in 55 cities worldwide. When the project completed, the piano was relocated to the site of a former bus stop in Alfrieda Street, St Albans, which Tadros helped convert into a temporary pop up park.

Tadros says that he sees “children and the people in the street get inspired” by the project. “I’m really happy when I’m walking in the street and I see people play the piano, and people come and gather around them and start talking. What is nice is that you start fighting against violence in the street by putting a piano there for the people”.

Tadros’ current solo exhibition, Pianos Are Us, is an extension of the concepts developed in the Play Me I’m Yours project. Tadros says that he sees the work in this exhibition as a “a request to everyone to find his piano and collaborate with his soul, his heart and the world to create a human melody”.