Out of trouble and onto a pathway towards a bright future

Three years ago, when Charles was 15, he was asked to leave home. 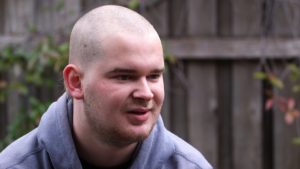 “I had a pretty bad home life and my parents asked me to move out because I was a bad influence on my little brother,” he says. As a result, Charles moved to a residential unit in the out-of-home care system.

Life was tough and Charles got into trouble which led him to have contact with the police and courts.

“I was getting drunk and doing property damage and shoplifting when I was drunk… when I had to go to court it was the worst experience of my life.”

Charles ended up spending time in youth detention when he was 17 and was unable to get the support he needed to deal with his alcohol abuse.

“I think prisons are like a breeding ground because kids will pick stuff up from other kids or meet up when they get out,” he says.

“They’ll just get locked up, come out and reoffend again. It becomes a cycle.”

Now, Charles’ future is looking much better. After leaving detention, he was supported into private accommodation by Jesuit Social Services, where staff assist him to develop independent living skills.

“I have my own kitchen, I cook two or three nights a week because I have staff there showing me how to do it.”

Charles has also developed a strong relationship with experienced youth worker Ron Zarth, whom he describes as a role model.

“I’ve learned a lot of things; tolerance, understanding… [and] I’ve matured a bit too,” he reflects.

He also has a goal of completing Year 12, studying land management and getting a job with an organisation like Parks Victoria.

Charles says the opportunity for a second chance has helped him get his life back on track.

“To take accountability and responsibility at first is really hard, hearing what you’ve done to people… But once you take responsibility for that, the only thing you can do is move on and make the future better.”

Charles shares his story in a video for our #WorthASecondChance campaign which you can view at www.worthasecondchance.com.au.