Three days a week, Wol Majok goes to his job at a supermarket, completes his shift and then goes straight to class to support his dream of becoming a police officer. 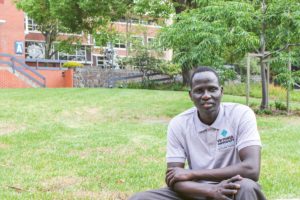 “The days are very long and it is very tiring but it shows how committed I am to hopefully becoming a police officer and serving the Victorian community,” he says.

Wol, who settled in Australia from South Sudan in 2003, is a participant of the Victoria Police Diversity Recruitment Program run by Jesuit Social Services, Victoria Police and Victoria University Polytechnic.

This intitiative was developed with the support of many other organisations, including the African Australian Multicultural Employment and Youth Service, AMES Australia, Matchworks JobActive, Maurice Blackburn Lawyers and Jobs Victoria,

Wol had applied unsuccessfully for a position with Victoria Police in the past. He says the mentoring support and skill development he has received during the 15 week training course has been vital in helping him, to hopefully succeed this time.

“We get to learn about what’s involved in being a police officer, we get to hear from and meet with current police officers to understand what they do every day and we learn important skills like how to de-escalate a situation which we may deal with in the community.”

Participants are also supported to improve their swimming skills and fitness levels ahead of the Victoria Police recruitment process, and applicants who are successful in entering the Police Academy will receive on-going mentoring.

Victoria Police Community Engagement Inspector Stephen Mutton says “We want quality applicants who are capable of doing the job. We’re excited to partner with Jesuit Social Services who will help identify these applicants as well as provide them with support so they can succeed in their application.”

Wol says the program can play an important role in improving social cohesion.

“There are many African communities in Victoria, but we are all part of the wider Victorian community. It will be good if the program can bring everyone together, build trust and respect and show everyone that we are all Victorians and we are all the same.”

The Victoria Police Diversity Recruitment Program is currently accepting expressions of interest for its second round commencing in April.