Jesuit Social Services’ Support After Suicide program together with Anvil Productions were proud to produce contemporary new drama 2:20AM, which premiered in Melbourne in September. 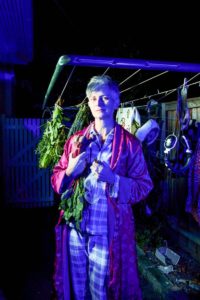 2:20AM portrayed stories of suicide bereavement.

The play revolved around four people bereaved by suicide, who met at a creative writing class. Playwright Rebecca Lister interviewed a number of program participants during the creative process.

“We had an incredible response to the show and it was really moving to receive feedback from people who said it struck the right chord with them,” says Rebecca. Audience member Declan described the show as “profound, sad, moving and funny”.

“As a society, we find it so hard to talk about death and make space for grief whether it’s our own or that of others. One of the great strengths of the work is that it artfully examined this with the extra layer of complexity that comes with death by suicide,” he says.

Anvil Productions is planning for 2:20AM to tour regional and rural Victoria in 2019.

If you’d like to discuss how you can support 2:20AM, please contact Nicole Dunham on 03 9421 7600 or nicole.dunham@jss.org.au. For more information on the play, visit www.anvilproductions.com.au.